The ruling Law and Justice Party claim a postal ballot will stop coronavirus from spreading during next month's presidential elections. But the opposition is calling the ballot undemocratic. 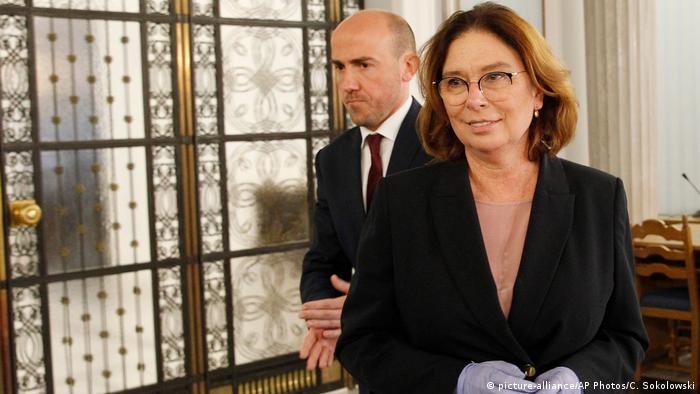 Opposition candidates have criticized Poland's ruling party for pushing ahead with the country's presidential election that will be conducted wholly by a postal vote on May 10.

Poland's ruling Law and Justice Party (PiS) pushed the measures through the country's lower house earlier this month, claiming it would limit the spread of the coronavirus.

But critics are worried that it will unfairly boost the re-election hopes of PiS-backed incumbent President Andrzej Duda. He has overseen far-reaching, controversial reforms to the media and judiciary.

The election will be "a coup d'etat not only against our democracy but also against the life and health of Poles," opposition Civic Platform presidential candidate Malgorzata Kidawa-Blonska told Poland's Fakt newspaper in a video posted on Saturday.

"This election will not be democratic and the result is fixed in advance. We cannot take part or encourage Poles to take part in this farce," she said. "This election must not go ahead on May 10."

Civic Platform's president Borys Budka said "the health and life of Poles" are at stake whether the election takes place, reported The Associated Press. "No responsible person would call for participation in such a vote."

Civic Platform, Poland's main opposition party, is calling for the vote to be postponed by a year.

PiS says the date of the election is dictated by the country's constitution and that going ahead with the mail-in voting would be a democratic victory that poses no health risks to those voting.

Health Minister Lukasz Szumowski commented Friday to Polsat television that a safe physical ballot could only take place once there was a vaccine for COVID-19.

Is the postal ballot democratic?

Under the rules for the upcoming election, there will be no physical polling stations. Instead, all ballots will be delivered by post. Each person will drop their vote in special post boxes in their local area, which will be sent for counting.

There is uncertainty around how well government agencies will be able to organize a postal vote for around 30 million people for the first time, with just over a month to prepare.

EU Values and Transparency Commissioner Vera Jourova told Polish daily Rzeczpospolita earlier this month that she was "concerned about free and fair elections and the quality of voting, of the legality and constitutionality of such a vote."

Thousands of hectares of precious wetland have burned as the world marks Earth Day in honor of protecting the environment. Experts have blamed climate change and the Polish government's water polices. (22.04.2020)

Poland has marked the 10th anniversary of the plane crash that killed President Lech Kaczynski and 95 others. But a gathering of politicians drew accusations of hypocrisy amid a nationwide coronavirus lockdown. (10.04.2020)