Poland has marked the 10th anniversary of the plane crash that killed President Lech Kaczynski and 95 others. But a gathering of politicians drew accusations of hypocrisy amid a nationwide coronavirus lockdown. 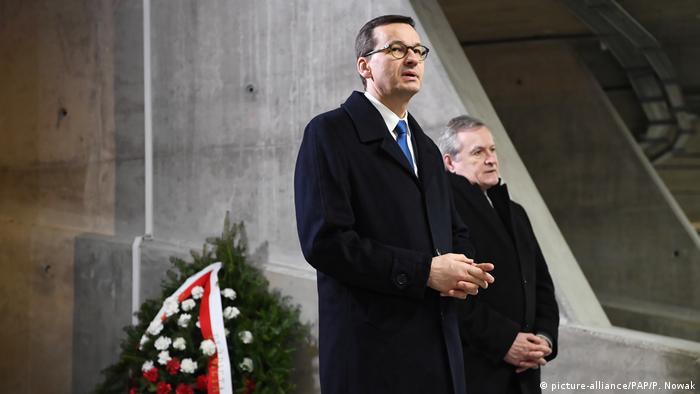 Polish Prime Minister Mateusz Morawiecki was joined by more than a dozen ruling party politicians on Friday, for a wreath-laying ceremony to remember the victims of the Smolensk air disaster.

Scores of members of a high-level Polish delegation, including President Lech Kaczynski, died on April 10, 2010, as the plane approached an airport near the Russian city of Smolensk.

A large number of Poles, including President Andrzej Duda, suspect that the crash was not caused by pilot error, as concluded in an investigation by Poland's previous centrist government, but by foul play.

Duda, who is an ally of the ruling Law and Justice Party (PiS) on Friday said he regretted that the COVID-19 pandemic made it impossible to mark the tragedy properly.

"After 10 years, it's difficult to say anything or predict whether the case can ever be resolved," said Duda, after visiting Kaczynski's grave in Krakow.

PiS was founded by the deceased president and his identical twin brother Jaroslaw, who remains party chairman.

The Smolensk crash was Poland's worst tragedy since World War II. It killed not only the president and first lady, but many other top government and military officials. The fact that the delegation had been traveling to commemorate the 1940 Katyn massacre of some 22,000 Polish officers by the Soviet Union only served to deepen the national sense of grief.

However, some members of the opposition accused the ruling party of double standards, with the ceremony taking place as the country remained under strict lockdown.

"It is not all right," said Jan Grabiec, a spokesman for centrist opposition party Civic Platform. "With all certainty, there was a way to mark today's anniversary by following the rules that all Poles must follow, and that Poles pay fines for breaking."

Cezary Tomczyk, a lawmaker with Civic Platform, said it was "outrageous'' that parks and forests have been closed across the country, and with fines handed out to regular citizens for flouting the rules.

Meanwhile, Poland's Foreign Ministry said it had sent a diplomatic note to the Russian Embassy in Warsaw demanding the return of the plane wreckage.

Polish officials said that, in the communiqué, Moscow had been urged to ''immediately surrender Poland's property.''

The request has been made on several occasions in the past, with Russia replying that it is keeping the wreckage of the Tupolev plane as part of an ongoing investigation. Moscow says there is no evidence of an explosion on board the plane, as some in Poland have alleged.

Polish PM Morawiecki has slammed Russian President Putin's claims that Poland is partly responsible for WWII. The row touches on both countries' images at home and abroad. Magdalena Gwozdz-Pallokat reports from Warsaw. (31.12.2019)

Donald Tusk took a seven-year break from Polish politics as European Council president and chairman of the European People's Party. Now he's back on home turf, hoping to unseat the ruling PiS party. What are his chances?