Foreign Minister Jacek Czaputowicz has resigned as part of a Cabinet reshuffle. It comes as Warsaw seeks to play an active EU role amid the Belarusian crisis. 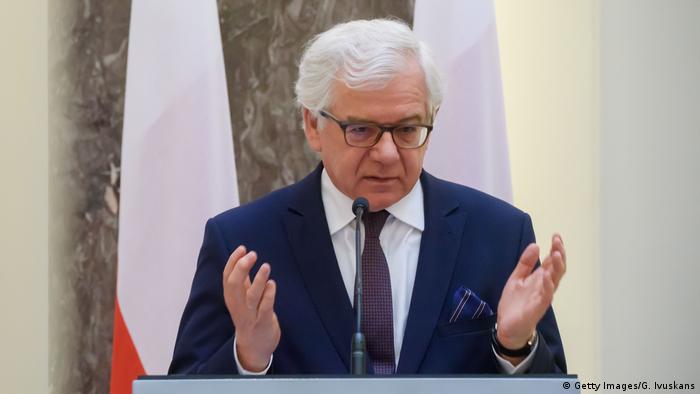 It comes after Health Minister Lukasz Szumowski resigned on Tuesday amid rising coronavirus infections and accusations of a bungled response.

Czaputowicz, 64, is seen as a more moderate member of the right-wing government and had been foreign minister since January 2018.

Their replacements will be announced soon, according to a government spokesman. The ruling right-wing, Law and Justice party announced a government reshuffle after President Andrzej Duda was reelected in July.

Czaputowicz's resignation comes as Poland attempts to position itself to play a leading role in the European Union response to the Belarus crisis.

Belarusian Incumbent President Alexander Lukashenko has accused Warsaw of meddling in its affairs and ordered his army to the Polish border.

Polish Prime Minister Mateusz Morawiecki rejected the accusations. He has called on the EU to act to reduce Belarus's economic dependence on Russia.

On Wednesday, Czaputowicz met with prominent Belarusian opposition activists Valery and Veronika Tsepkalo. Last weekend, he hosted US Secretary of State Mike Pompeo to sign a deal deepening Polish-American defense cooperation at the expense of Germany.

His office told PAP news agency that "the minister has in the past said that the post-election period was the right time for a change" in the post of foreign minister.

He hopes "that his successor will maintain the current line and support the strengthening of Poland's position on the international stage."

In addition to the two ministerial resignations, the deputy health minister and the deputy digitalization minister resigned recently too.

Is Belarus closer to the West or to Russia?

Anti-government protesters have rallied in Minsk and other cities for more than a week — but they haven't been waving EU flags. Experts point out that Belarus is a pro-Russia country, even without President Lukashenko.

Shortly before Poles started voting in a runoff presidential election, President Duda has accused German media of intervening in the campaign. Surveys show him and his challenger, Rafal Trzaskowski, in a tight contest.