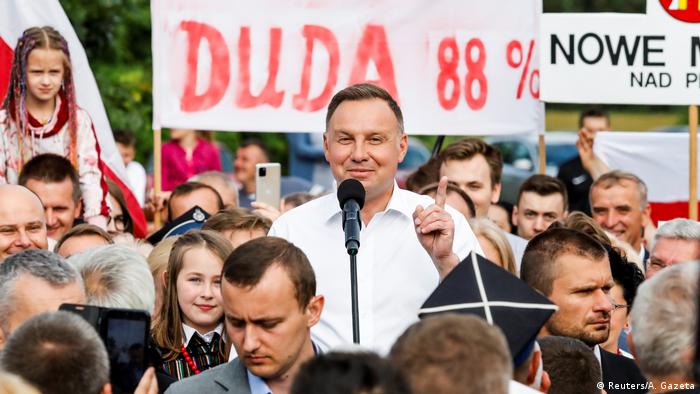 Poland's Supreme Court announced Monday that it would allow the results of the country's July 12 presidential election to stand, paving the way for incumbent conservative President Andrzej Duda to be sworn in for another term on Thursday.

The court's Chamber of Extraordinary Control and Public Affairs, the members of which are all part of the ruling Law and Justice party (PiS) appointees, said that although it found irregularities in the vote, none had influenced the final result.

Duda is seen as an ally to the populist, right-wing Law and Justice party. The incumbent narrowly won, tallying  51% of the vote over Trzaskowski's 49%.

"The Supreme Court confirms the validity of the election of Andrzej Sebastian Duda to the Polish presidency," Judge Eva Stefanska said Monday.

The court reviewed some 5,800 complaints and upheld 93 in the process of reaching its conclusion. Those complaints were lodged by individuals as well as by the campaign of Duda's rival, Warsaw Mayor Rafal Trzaskowski of the Civic Platform party.

Another major bone of contention was, according to Trzaskowski's campaign team, that the state media's coverage was heavily biased in Duda's favor. The court struck down that argument, stating: "The fact that voters chose to use a given source of information … cannot be equivocated to manipulation."

Observers from the Office for Democratic Institutions and Human Rights at the OSCE, an intergovernmental organization that monitors elections, said the Polish presidential vote had been "tarnished" by state television coverage, noting: "The incumbent's campaign and coverage by the public broadcaster [TVP] were marked by homophobic, xenophobic and anti-Semitic rhetoric."

Legal experts also argue that one other aspect of the vote still raises questions, namely the fact that it was not held before the constitutionally mandated deadline.

Originally scheduled for May 10, the vote was postponed due to the coronavirus pandemic. However, the constitution states that an election can only be delayed by a state of emergency, something that was not in place at the time the decision was made to postpone the vote.