Incumbent President Andrzej Duda has won the first round of Poland's presidential election, garnering 45.73%, partial results showed. The vote had been postponed because of the COVID-19 pandemic. 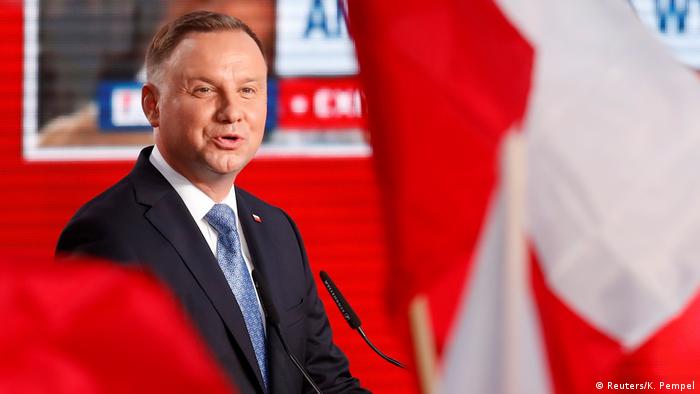 Poland's incumbent president, Andrzej Duda, backed by the governing Law and Justice (PiS) party, won the most votes, according to partial results released early Monday, the day after the election.

Duda got 45.73% of the vote, according to the first indications, falling short of the 50% needed to claim victory in the first round.

If the projection is confirmed by official results, Duda will face a runoff vote in two weeks' time against Warsaw Mayor Rafal Trzaskowski.

Trzaskowski, who is standing for the largest opposition party, the centrist Civic Platform (PO) got 30.4% of votes, the poll by the Ipsos polling firm showed.

Read more: Poland heads to polls to elect next president

Opinion surveys conducted last week indicated that Duda could have a more difficult time in a runoff.

"There were nine other candidates fighting for [the presidency], DW's Wojciech Szymanski said. "There was a candidate of the leftist party, for example, so [...] who will the voters of a leftist party support in the second round?"

"It is, of course, more possible that they would vote for Mr Trzaskowski than Mr Duda — a candidate of a right-wing national conservative party."

Polls based on actual results were expected to be released around midnight and 3 a.m. Poland's state electoral commission said it would release the final official results by Wednesday evening. 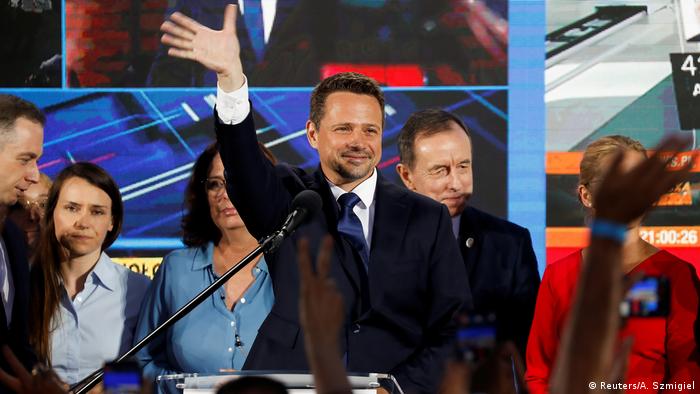 Duda campaigned on a conservative social agenda, and a pledge to safeguard traditional family values in the predominantly Catholic country.

"I believe that the Law and Justice Party […] knows that scaremongering is always a powerful weapon in a campaign in Poland, so they used this to mobilize its very hard-core electorate," said DW's Wojciech Szymanski.

Trzaskowski instead supported gay rights and said he is open to the idea of same-sex civil partnerships.

Campaigning with the slogan "Enough is Enough," Trzaskowski promised a different Poland, although many see his PO party as weak and ineffectual.

No candidate was expected to gain the level of 50% plus one vote, which they would need to secure the presidency in the first round.

Duda is expected to lead, but is likely to go head-to-head with Trzaskowski in a July 12 run-off, opinion polls show.

Homophobia on the rise

Since winning power in 2015, both Duda and the PiS have stoked tensions with the EU and provoked repeated street protests at home for controversial laws giving the party control over the top courts and other key judicial bodies.

While PiS insists the changes are needed to weed out judicial corruption, critics and the EU insist they erode judicial independence and democracy just three decades after Poland shed communism.