Poland heads to polls to elect next president

The presidential election is seen as crucial to the ruling party's ability to make progress on its socially conservative agenda. It will also determine the trajectory of the country's tense relations with the EU.

Poles turned out in high numbers on Sunday to vote in round one of a tight presidential race that had been postponed because of the coronavirus pandemic.

Lines of people wearing masks and observing social distancing measures were reported outside polling stations in cities across Poland.

Incumbent Andrzej Duda, 48, is expected to face a strong challenge from Warsaw Mayor Rafal Trzaskowski and nine other candidates.

About 48% of Poland's 30 million voters had cast their ballots by 5 pm (1500 GMT), reported Germany's DPA news agency. That's slightly below the total voter turnout from the 2015 presidential vote, according to the electoral commission.

Voting is set to continue until 9 p.m. (1900 GMT), with exit polls expected soon after.

If no candidate wins more than 50% of the votes, the two with the biggest share will compete in a second round on July 12.

Originally scheduled for May, the ballot was postponed due to the COVID-19 pandemic, and a new hybrid system of postal and conventional voting is in place on Sunday in a bid to stem infections.

There are limits on the number of people that can enter a polling station. Voters are required to observe a two-meter distance between each other and cover their faces; face masks may be only temporarily removed to allow identification by electoral officials. Voters are also encouraged to take their own pens with them and use disinfectant as they enter the polling stations.

While official figures show over 33,000 confirmed cases and more than 1,400 deaths, the health minister has admitted that there are likely up to 1.6 million undetected cases in Poland, an EU country of 38 million people. 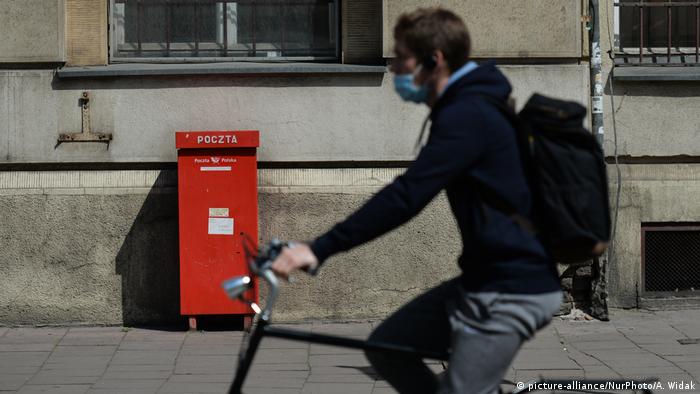 Poland's presidency carries some responsibilities in defense and foreign affairs as well as the right to veto legislation. No candidate is expected to gain the level of 50% plus one vote, which they would need to secure the presidency in the first round.

Duda is expected to lead, but is likely to go head-to-head with Trzaskowski in a run-off, opinion polls show.

Bread-and-butter issues are weighing heavily on voters' minds as the economic fallout of the outbreak is set to send Poland into its first recession since communism's demise.

Incumbent Duda has vowed to be a guardian of Poland's ruling Law and Justice (PiS) party's socially conservative agenda and economic programs, which include generous social spending and its pledge to safeguard traditional family values in the predominantly Catholic country.

Since winning power in 2015, both Duda and the PiS have stoked tensions with the EU and provoked repeated street protests at home for controversial laws giving the party control over the top courts and other key judicial bodies.

While PiS insists the changes are needed to weed out judicial corruption, critics and the EU insist they erode judicial independence and democracy just three decades after Poland shed communism.

Campaigning with the slogan "Enough is Enough," 48-year-old Trzaskowski promises to use the experience and contacts he gathered as a former European affairs minister to "fight hard" for a fair slice of the EU's 2021-27 budget, and to repair tattered ties with Brussels. He has however vowed to keep the PiS's popular welfare payments.

Victory for Trzaskowski would deal a heavy blow to the PiS government, which has relied on its ally Duda to endorse polarizing legislation, and could hamper the government's ability to deepen its justice reforms.

US President Donald Trump, who regards the populist PiS administration as a key European ally, gave Duda his blessing this week.

Trump invited him to the White House on Wednesday as the first foreign leader to visit since the coronavirus pandemic began, just four days ahead of election day.

Priests in the Polish diocese of Kalisz have refused to sign letters of loyalty to their bishop after a child abuse cover-up. More and more Catholics in Poland are calling on the Church to properly investigate crimes. (30.05.2020)