President Trump reiterated his plan during a joint press conference with his Polish counterpart, Andrzej Duda, at the White House. Trump is annoyed over Germany's defense spending and its buying energy from Russia. 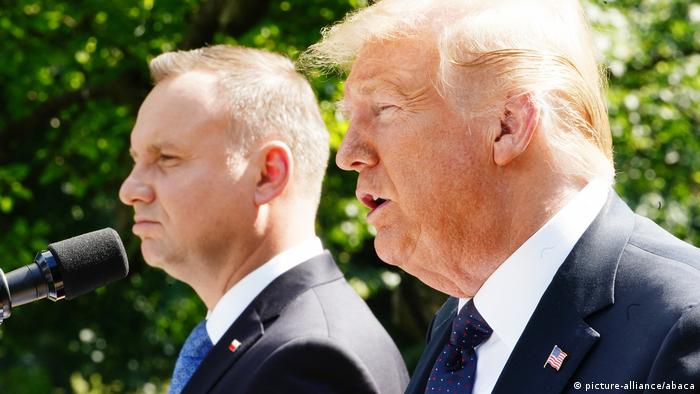 US President Donald Trump on Wednesday repeated his plan to move some troops from Germany to Poland, while criticizing Berlin for not meeting a NATO defense-spending target and for acquiring energy from Russia.

"They will be paying for the sending of additional troops, and we will probably be moving them from Germany to Poland," Trump said during a press conference together with Polish President Andrzej Duda.

He said the United States would be decreasing its armed forces presence in Germany "very substantially." Some of the troops would be heading back to the US, while others would be redeployed elsewhere, such as Poland.

Asked how the decision would be viewed by the Kremlin, Trump said: "It sends a very strong signal to Russia, but I think a stronger signal sent to Russia is the fact that Germany is paying Russia billions of dollars to purchase energy from Russia through the pipeline."

The US president has previously expressed his frustration at the Nord Stream 2 pipeline , and has said he is planning the withdrawal of 9,500 troops from Germany.

At his meeting with Duda, Trump also questioned why the US is "supposed to defend Germany from Russia" and said German citizens are not happy about the situation.

Duda, asked the US president not to reduce the American armed forces' presence in Europe as it would destabilize the continent's security.

Read more: Stoltenberg — US presence in Europe is important for NATO

"I turned to the president, asking him not to withdraw troops from Europe as Europe's security is important to me," Duda said.

The presence of the United States military has made peace more viable in Europe since the end of World War II, he said, adding that Poland was ready and willing to take in more US troops.

China has said it did not detain any Indian soldiers, despite reports that 10 were released after being held on Beijing's side of the border. The Indian army also indicated that none of its personnel were in custody. (19.06.2020)

The US says its sanctions will prevent Russia from finishing the controversial Baltic gas pipeline, whose endpoint lies in Germany. The resolution of the dispute may carry geopolitical implications. (17.02.2020)

South Korea and the US are holding joint military drills, involving aircraft, warships, tanks and potentially tens of thousands of troops.