A Warsaw court has overturned a ban on a far-right march to mark Poland's centennial celebration of independence. Organizers were emboldened by the ruling, saying it has made them "victorious." 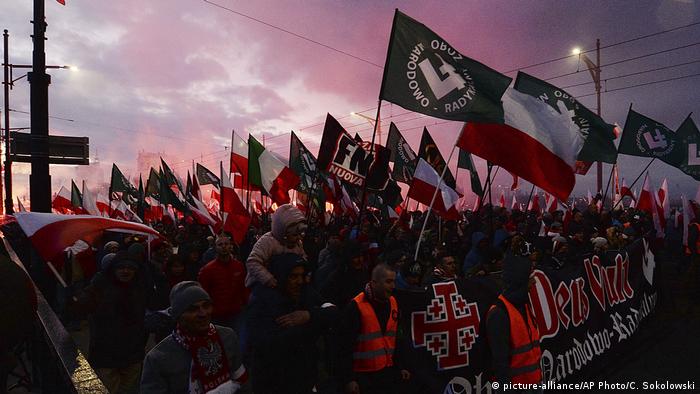 A Polish court has ruled against a decision by Warsaw's mayor to ban a far-right march in the capital ahead of Poland's centennial celebration of independence.

"We are victorious, the independence march will take place in Warsaw," said organizers, members of Polish far-right groups, on Thursday.

Warsaw Mayor Hanna Gronkiewicz-Waltz, who banned the march on Wednesday, said her city had "suffered enough because of aggressive nationalism."

"This is not how the celebrations should look on the 100th anniversary of regaining our independence," she said.

Battle of the right

After the mayor banned the march on Wednesday, Polish Prime Minister Mateusz Morawiecki of the right-wing Law and Justice party (PiS) said a separate march would be held on Sunday following the same route as the far-right one.

"We do not accept, we do not allow for those [far-right] groups gathering in Poland under any circumstances," Morawiecki said.

However, now that the far-right rally is back on, it's unclear whether the government-sponsored march will go ahead.

Some of the protesters carried provocative banners and shouted slogans, such as "Pure blood, clear mind" and "Europe will be white or uninhabited."

Organizers said they expect up to 250,000 participants this year. Authorities have warned that the march may require additional security measures due to the potential for violence.