Warsaw's mayor wants to avoid the racism that plagued last year's independence day celebrations in Poland's capital. But the nationalist government has other ideas. 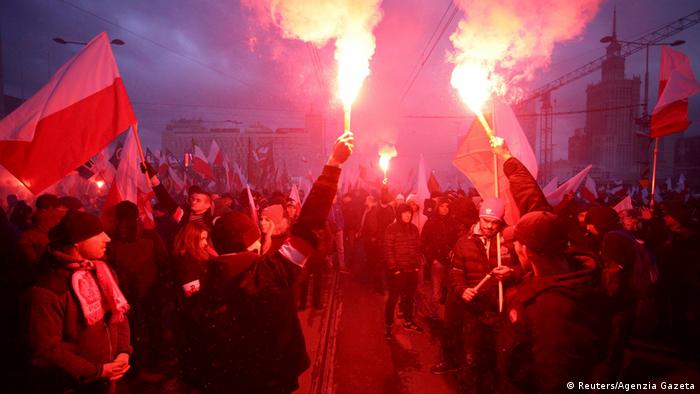 The mayor of Warsaw has banned nationalist demonstrators from marching during planned independence day celebrations on Sunday.

"This is not how the celebrations should look on the 100th anniversary of regaining our independence," Hanna Gronkiewicz-Waltz said on Wednesday. "Warsaw has suffered enough under aggressive nationalism."

Polish nationalists and far-right organizers from the National Radical Camp (ONR) had expected between 100,000-250,000 participants for this year's "independence march."

Members of the far-right Law and Justice party (PiS) have vowed to organize another march led by President Andrzej Duda. PiS has been in office at the national level since 2015.

Sunday's festivities will mark Poland's 100th anniversary as an independent country. Its territory had been split between the German kingdom of Prussia, the Austro-Hungarian Empire and the Russian Empire prior to 1918.

In a DW interview, Senate speaker Stanislaw Karczewski defended the country's controversial judicial reforms that have been challenged by the EU. He also praised the Polish people for being Europe-friendly. (24.07.2018)