One of the Bundesliga's longest-running transfer sagas has come to an end, with Pierre-Emerick Aubameyang signing for Premier League side Arsenal. The reported €64 million fee is a record for the English side. 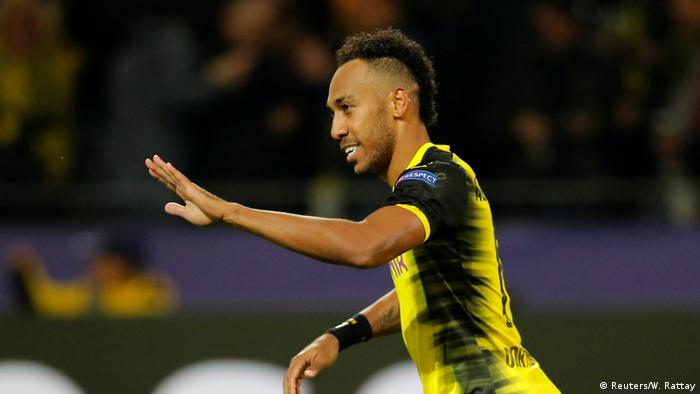 Pierre-Emerick Aubameyang has left Borussia Dortmund and joined Arsenal for a reported fee of €64 million ($79 million). The 28-year-old's deal completed on deadline day is thought to be worth €205,000 a week, according to various media.

Dortmund announced the transfer in a statement without giving details, but Arsenal in their own statement said it was a record buy for the Premier League outfit and he had penned a long-term contract.

"I think the club has such a big history and great players like Thierry Henry. He's an example for us strikers. I’m really happy," Aubamayang told the Arsenal website as he gears up for the sixth-placed side's game with Everton on Saturday.

"I hope that we will come back to the top as soon as possible. I will do my best to join in."

Dortmund sporting director Michael Zorc said: "Apart from the unpleasant events of recent weeks, we remember that the story of Pierre-Emerick Aubameyang at Dortmund was a huge success for more than four years. He has done great things for Borussia Dortmund, scored many important goals and was part of the team that brought the German Cup to Dortmund in 2017. We wish Pierre-Emerick all the best for his future at Arsenal."

Michy Batshuayi was later confirmed as Aubameyang's replacement, joining on loan from Chelsea, where the Belgium striker has failed to establish himself in two years since a big move from Marseille. The complicated transfer triangle also involved Arsenal's Olivier Giroud crossing London to join Chelsea.

Aubameyang's departure comes at the end of a fairly drawn-out transfer saga that looked at one point like it would not to be completed by the end of the January window.

Despite a prolific stint with the German club, Aubameyang leaves under something of a cloud.

Ill-discipline saw him suspended on three occasions and he was even booed by Dortmund's famous Yellow Wall — the same fans that used to celebrate his goals wildly.

Aubameyang joined Borussia Dortmund from St. Etienne in the summer of 2013 for €13 million and he went on to make 213 appearances for the club, leaving as their third all-time leading goalscorer with 141 goals in all competitions.

The pacy frontman notched 13 goals or more in each of his five Bundesliga seasons but his best haul came last season when he scored 31 in 32 Bundesliga games. The Gabon forward also leaves Germany as the Bundesliga's top-scoring African player with 98 league goals.

Enfants terribles in the Bundesliga

Enfants terribles in the Bundesliga

The Belgium striker will have big boots to fill at Dortmund. But the deal is a loan, which takes some of the pressure off as the former Marseille man tries to adjust to the Bundesliga. (31.01.2018)