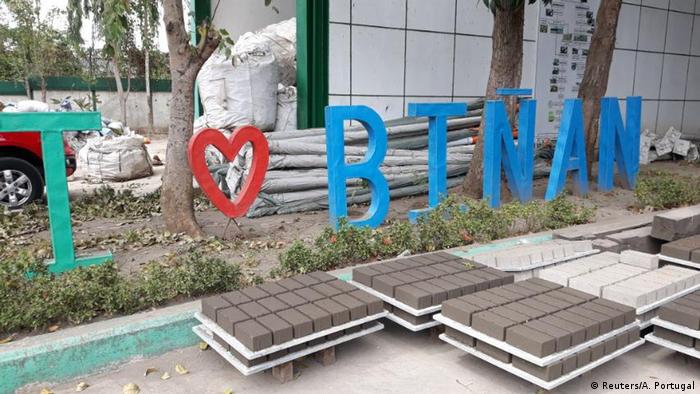 Residents from the Philippine city of Binan are mixing ash spewed from the Taal volcano with plastic waste to make bricks and rebuild houses and schools.

After the Taal volcano erupted last week, environmental officials in the region tried to come up with an inventive and more sustainable response to the country's persistent problems with pollution and frequent natural disasters.

"Instead of just piling up the ashfall somewhere, we are able to turn it into something useful. And it includes plastics, too," said city environmental officer Rodelio Lee.

The mayor of Binan asked residents to collect the fine gray ash shrouding homes, cars and roads and put it in sacks to be sent to a state-owned factory.

The ash is then combined with sand, cement and discarded plastic to create around 5,000 bricks per day for local building projects damaged since Taal.

"When the ash came, we thought we'd exchange the white sand which we mix with plastics to be converted into bricks with ash. We did it and they came out sturdy," city Mayor Walfredo Dimaguila told Reuters.

"What we plan is to turn them into hollow blocks and bricks and sell them to interested companies," he said, adding that the proceeds would be donated to residents affected by the volcano.

The Philippines also faces a waste crisis, with a 2019 report saying the country uses a "shocking" amount of single-use plastic and that almost 60 billion throwaway sachets were used.

Taal, located on the island of Luzon, is one of the Philippines' most active and deadliest volcanoes. The restive volcano began spewing ash, gas and steam on January 12.

Read more: How dangerous are bushfires and volcanic ash for the lungs?

Rebuilding lives one brick at a time

Several buildings close to the Taal volcano were destroyed as heavy ash crushed makeshift roofs and knocked over trees. Jets of lava and 15-km (9-mile) walls of ash have sent more than 100,000 people into emergency evacuation centers

Authorities warn that a much more serious eruption could happen anytime.

"When [neighboring] Batangas is in recovery, we will bring the bricks there for building schools, community halls and livelihood centers so that we can give back what Taal has given us," Dimaguila said. "The misfortune of our neighbors in Batangas is there. Let's transform this into opportunity."

The Taal volcano in the Philippines has spewed lava and ash for three straight days. Thousands of residents have been evacuated and authorities warn that it could erupt at any moment. (14.01.2020)