Philippine President Rodrigo Duterte has stressed the need for reaching out to the North Korean leader Kim Jong Un. Duterte also said he would welcome Donald Trump as an "important leader" in his Manila trip next month. 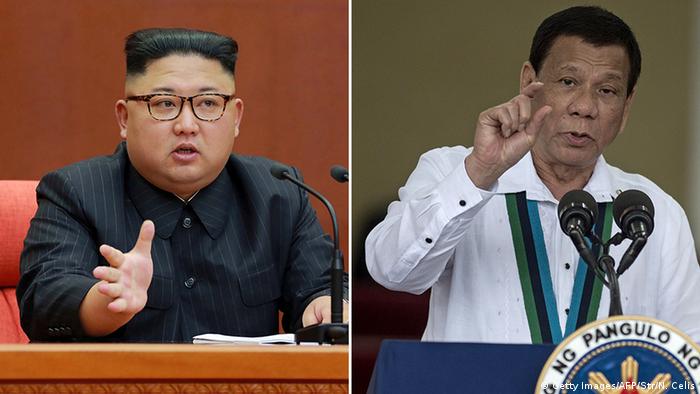 Rodrigo Duterte said Sunday that China, Japan, South Korea and the United States should consider sending an envoy to North Korea to avoid a nuclear war, which the Philippine president said would be "totally unacceptable."

"All world leaders agree that he [Kim Jong Un] is a dangerous man," Duterte told a press conference before leaving for a two-day visit to Japan. "But somebody has to talk to him."

"Somebody has to go there. Someone has to reach out and talk to him and say something like, friend, why don't you just join me at the table and talk about these things," Duterte added.

The Philippine president, who is notorious for his short temper and abusive language against his critics, had previously described Kim as a "fool" and "son of a bitch" for "playing with dangerous toys."

"We are worried. If anything can go wrong, it will go wrong. A nuclear war is totally unacceptable to everybody," Duterte stressed, saying the international community needed to assure Kim that "nobody's threatening him."

Read more: Looking inside the mind of Philippines' Duterte

He said he planned to discuss the North Korean crisis on Monday with Japanese Prime Minister Shinzo Abe, who discussed North Korea with NATO chief Jens Stoltenberg in Tokyo.

Stoltenberg called North Korea a "global threat" and said he backed tighter sanctions against it.

South Korea and China's nuclear envoys are also due to meet on Tuesday to discuss North Korea's nuclear and missile programs, South Korea's foreign ministry said in a statement.

About his meeting with US President Donald Trump next month, Duterte said he would meet him "in the most righteous way."

Trump will travel to Asia on November 3 amid escalating tensions over North Korea's belligerence in the region. He will be in Manila on the last leg of his visit, which includes trips to China, Japan, South Korea and Vietnam. Trump will also attend the ASEAN leaders' summit.

"I would deal with President Trump in the most righteous way, welcome him as an important leader," Duterte said. "I would also listen to him, what he has to say."

Under Duterte's presidency, Manila has drifted closer to Beijing, with the Philippine government announcing a "separation" from Washington last year.