Award-winning journalist Maria Ressa has been arrested again at Manila's airport. Press freedom advocates say the government is targeting her website Rappler for its critical coverage. 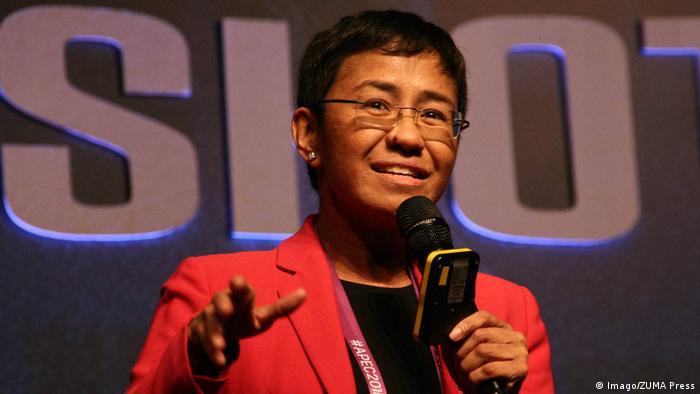 A prominent Philippine journalist critical of President Rodrigo Duterte's brutal war on drugs was re-arrested at Manila's airport on Friday.

Maria Ressa, the CEO and editor of the website Rappler, was taken into custody for violating foreign ownership rules and committing securities fraud.

"I am being treated like a criminal when my only crime is to be an independent journalist," she told ABS-CBN news channel as she was taken away by police.

Rappler and press freedom advocates say the charges against Ressa are intended to intimidate the press and silence Duterte's critics.

"Rappler has clearly become the whipping boy of the Duterte administration as it seeks to silence or intimidate the independent and critical press," the National Union of Journalists of the Philippines said.

The journalist and six other current and former Rappler board members and editors stand accused of violating foreign ownership rules and securities fraud. The six others posted bail on Wednesday.

The charges relate to a 2015 bond sale to foreigners. Under the constitution, the media is an economic sector reserved for Filipinos or Filipino-controlled entities.

Rappler says the bond sale does not allow foreigners to intervene in its operations.

In February, Ressa was detained and later released on bail in relation to an internet libel case.

Rappler's reporters are known for scrutinizing Duterte's policies and questioning the accuracy of his sweeping, often bellicose statements.

Duterte's government says the recent detentions are "merely part of any criminal procedure" and that it has "nothing to do" with press freedom.

In an interview with DW, Filipino journalist Maria Ressa said that President Rodrigo Duterte's administration is targeting both her and Rappler news for criticizing the government and exposing the war on drugs. (13.11.2018)

President Rodrigo Duterte of the Philippines has denied that he influenced the Securities and Exchange Commission to revoke the license of the Rappler news site. Rights activists call it an attack on press freedom. (16.01.2018)