A ceremony to mark Catalonia's national day honored the German captain of the rescue ship "Sea-Watch 3," who helped save the lives of 40 refugees. The medal was presented by Manchester City manager Pep Guardiola. 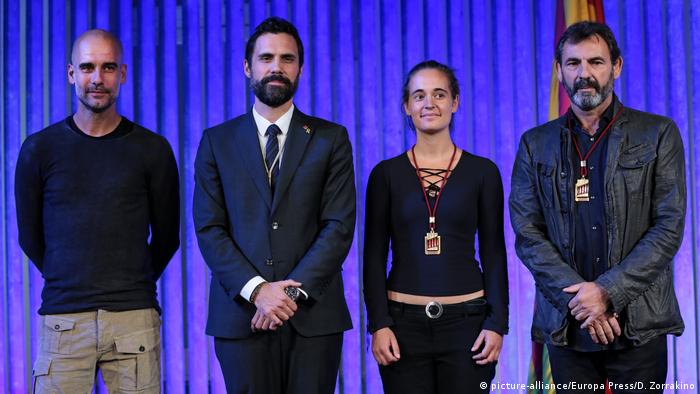 Carola Rackete accepted a medal at the award ceremony Tuesday. "There is one thing I want to say clearly: Medals and words are not enough," she said, and pleaded instead for "concrete actions and solidarity."

Guardiola, who manages Manchester City football team, commended her actions: "A world which does not save is a world which is sinking, and our society will drown."

The 31-year-old captain was arrested in June after she sailed with 40 migrants aboard her ship Sea-Watch 3 to the Italian island of Lampedusa. This went against the orders of then-Interior Minister Matteo Salvini.

Rackete took the step because of what she described as desperate conditions on board for the migrants. Salvini was subsequently investigated for libelling Rackete.

In a tweet, Rackete said the award "is really aimed at all of the Sea-Watch crew."

Rackete was released after two days but the investigation is ongoing. She said that she is not worried about the outcome as she knows that her actions were correct.

The founder of the Spanish aid organization Proactiva Open Arms, Oscar Camps, was also honored with a medal at the ceremony by Catalonia's regional parliament.

The jailed Catalan leaders were given a chance to speak for 15 minutes at the end of their trial in Madrid. They denied the charges of rebellion, sedition and misappropriation of public funds, and called for dialogue. (13.06.2019)

John Bolton, former National Security Advisor for Donald Trump, calls for the fall of the Iranian regime in DW interview 47m ago