Former US marine Paul Whelan has been in a Russian jail since 2018, accused of espionage. Washington has said the trial was "far from fair or transparent." 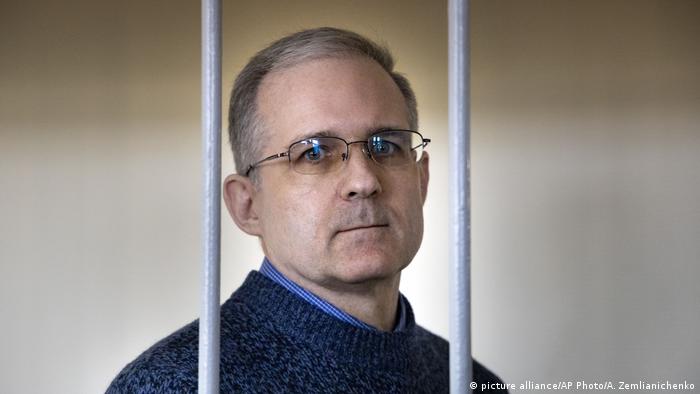 A Russian court on Monday sentenced former US marine Paul Whelan to 16 years in a penal colony for espionage.

As the verdict was read out, Whelan stood in the courtroom defendant's cage with a sign that read "Sham trial!" and called on the US president to intervene.

Whelan was arrested in 2018 and accused of seeking to obtain state secrets.

The trial against the 50-year-old has been held behind closed doors as US and Russia relations have been at a low point, following accusations by the US intelligence community that Moscow interfered with the 2016 presidential election.

US Ambassador to Moscow John Sullivan condemned the trial as unfair and lacking transparency. "It was secret, no evidence was produced, no allowances were made for defense witnesses," embassy spokesperson Rebecca Ross said on Twitter.

Whelan, who was dishonorably discharged as a marine before working as head of global security at a US auto parts company, has maintained his innocence.

He said he had traveled to Russia on December 2018 to attend a wedding. He was arrested in Moscow for receiving a USB drive from an acquaintance, which Whelan thought contained holiday photographs.

Authorities say the USB drive contained state secrets and has asked judge to sentence him to 18 years in a strict-regime penal colony.

The prosecutor in the case has claimed that Whelan holds the rank of officer or "at least a colonel" at the US Defense Intelligence Agency, Whelan's lawyer said.

The defendant's family said they always presumed a guilty verdict was a "foregone conclusion" while insisting this would "not be based on facts or justice." The family says Whelan has been mistreated in prison and not received necessary care during a medical emergency.

"It is unacceptable that Paul Whelan has been denied necessary medical treatment until his condition became dire," Pompeo said on Twitter.  "We demand Paul's release."