World leaders have come together for a two day G-20 summit in Turkey starting on Sunday. The usually economic- and trade-heavy agenda is expected to center around Syria, the refugee crisis and security. 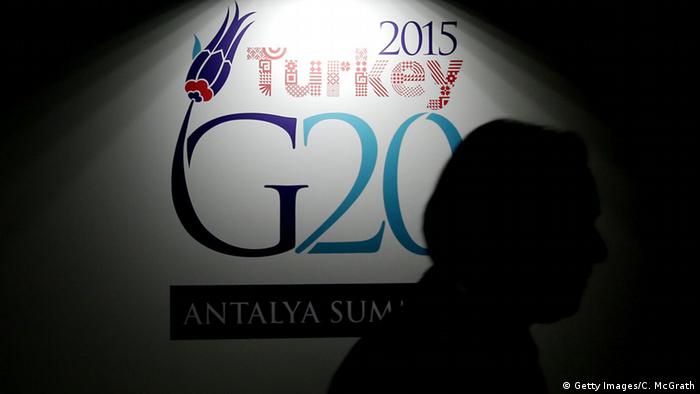 Leaders and delegates from industrialized countries representing 85 percent of global economic output will meet in the Mediterranean resort city of Antalya on November 15-16 amid heavy security.

The Group of 20 summit is being overshadowed by the terror attacks in Paris bringing renewed urgency to solve the Syria and refugee crises.

The location of the summit, while planned ahead due to Turkey's chairing of the G-20 this year, is apt given that the country in many ways stands at the center of the problems to be discussed.

Turkey shares a 900 kilometer (559 mile) border with Syria, including portions held by "Islamic State," and has hosted more than 2 million refugees, thousands of which each day try to make their way to Europe.

Turkish President Erdogan, fresh from a victory in elections, is likely to try to leave his mark on the summit proceedings. However, his country has often clashed with the leaders of Europe, the United States and Russia over their policies and positions in Syria.

No formal meeting between Obama and Putin

Ankara will likely again push the idea of creating a safe-zone in Syria, which was never supported by Washington, and insist on the removal of the Assad regime as a precondition to any political settlement, but the dynamics of the conflict have shifted significantly since Russia's military intervention.

US President Barack Obama and Russian President Vladimir Putin do not have a formal meeting planned, but White House officials have said the two leaders will have opportunities to talk on the sidelines of the summit. It will be the first time the two have met since Moscow intervened in Syria. The hope is that the two leaders can overcome their chilly relationship and narrow the gap slightly on the Syria crisis, but deep mistrust and policy divisions are unlikely to fade away.

The summit comes a day after foreign ministers gathered in Vienna to discuss resolving the Syria crisis. While those talks came up with a timeline to solve the five-year civil war and envisioned a ceasefire leading to a political transition, it left just as many prickly questions unanswered, particularly over the future of Assad and which rebels groups are considered moderate and which terrorists.

Looking ahead to climate summit

EU members of the G-20 are arriving at the summit reeling from the immediate impact of the Paris attacks, the fallout of which imperils a unified European response to handling migrants as the backlash against hundreds of thousands of refugees is likely to mount. The EU, and especially Germany, has sought to enlist Turkey's suppport in handling the refugee crisis. What remains to flesh out is what Turkey wants in return.