With high-ranking politicians appearing in the Paradise Papers, officials around the globe were quick to react to the leak. The EU and India have started investigations while Russian and US officials were on the defense. 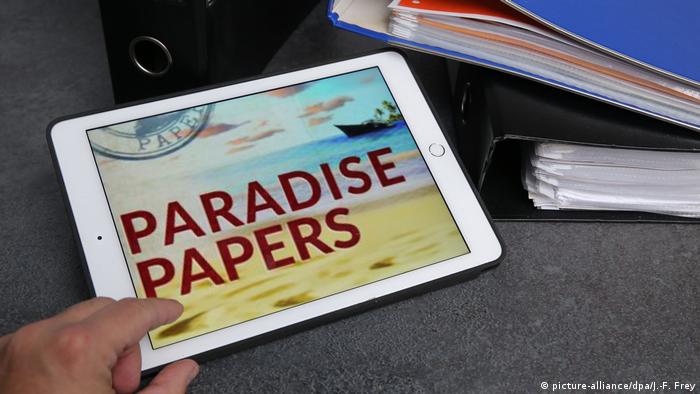 Governments around the globe worked quickly on Monday to respond to the Paradise Papers, a collection of 13.4 million leaked records from two offshore firms, after several politicans and public figures were mentioned in the data.

Obtained by German newspaper Süddeutsche Zeitung and investigated by the International Consortium of Investigative Journalists (ICIJ), the trove of leaked documents details the offshore tax avoidance methods used by the world's wealthiest companies and individuals.

Here's how some around the world reacted to the news:

Read more: Germans among those featured in the Paradise Papers

The bloc previously planned to reach an agreement on an EU-wide blacklist by the end of the year, although no decision is expected on Tuesday.

Currently, each of the EU's 28 member states has its own list of jurisdictions that are perceived as being less cooperative where taxes are concerned. The criteria to define tax havens vary widely among EU states with little consensus on the jurisdictions that appear on their national blacklists.

"It's time that we agree and publish a blacklist on tax havens," EU tax commissioner Pierre Moscovici told reporters, calling for "adequate sanctions" when serious offenses are unveiled.

"All of our investments are fully audited and legitimate," a spokesperson for the Duchy of Lancaster said in a statement. The duchy provides the monarch with her income and handles her investments.

They added that the queen "voluntarily pays tax on any income she receives from the duchy."

"The shocking revelations from the Paradise Papers today, yet again of widespread tax avoidance and evasion on an industrial scale, must lead to decisive action and real change," Labour leader Jeremy Corbyn said.

US Commerce Secretary Wilbur Ross, one of the main allies of US President Donald Trump implicated in the leak, denied any wrongdoing.

The papers revealed that Ross invested in a shipping firm that has significant business ties to Russian President Vladimir Putin's inner circle.

"There is nothing wrong with anything that was done," Ross told CNBC, adding that he properly disclosed his investments in Navigator Holdings, which reportedly transports gas for Russian petrochemical company Sibur.

He added that he is not considering resigning from his post.

As Commerce Secretary, Ross's ties to Russian entities raise questions about potential conflicts of interest and whether they undermine US sanctions on Russia.

Read more: Offshore — The legal and the not so legal

Russian officials downplayed the Paradise Papers data on Monday, with Russian companies and government officials saying that the deals leaked in the data were legal and not politically-motivated.

In a statement reported by Russian news agencies, petrochemical giant Sibur expressed "amazement at the politically charged interpretation in some media of ordinary commercial activity."

The head of the foreign affairs committee of the Russian senate, Konstantin Kosachev, accused reports on the leaks of "stirring emotions" and having "muddled wording."

"When it is boiled down, what is described here is standard and legal commercial activity," Kosachev told RIA Novosti state news agency.

Canada's tax agency said it has already started reviewing the Paradise Papers documents for any evidence of its nationals having used tax havens to avoid paying taxes at home.

Bronfman also denied any wrongdoing in a statement, saying that one multi-million dollar transfer to a trust in the Cayman Islands was made "in full compliance with all legal requirements."

Trudeau has made tax fairness one of his main policy aims.

Indian officials announced that a panel of government officials has been established to investigate cases mentioned in the Paradise Papers.

Officials from India's central bank along with members of government bodies will conduct and monitor the investigation, India's finance ministry said.

The names of some 714 Indians appear in the Paradise Papers documents. Although their inclusion in the documents does not mean they attempted to stash funds, some of the individuals and companies are already being investigated by Indian authorities.