The German capital of Berlin was gripped by panda fever Saturday as the city anticipated the arrival of two VIP guests from China: a pair of giant pandas known as Meng Meng (meaning Sweet Dream) and Jiao Qing (Darling).

The pandas were greeted at Berlin's Schönefeld airport by Berlin Mayor Michael Müller, China's ambassador to Germany and a flurry of journalists.

The pandas were then quickly loaded into a van and driven to Berlin Zoo. There, they will acclimatize for a week before being unveiled to the public by no less than German Chancellor Angela Merkel and Chinese President Xi Jinping.

The Chinese president will be in Germany to attend the G20 summit in Hamburg.

Read more: Why our obsession with animals is schizophrenic

Berlin Mayor Michael Müller said on Saturday that the city was "happy to be an attraction richer."

"Pandas are something special and they belong in Berlin," he added. "Since the death of Bao Bao in 2012 there has been a feeling that something is missing."

Bao Bao, lived to be 34, becoming the oldest male panda in the world before he died.

The two pandas were flown in on a Lufthansa Cargo plane from Chengdu, in southwestern China. The airline made a special detour from its scheduled flight from Beijing to Berlin when stopping to pick up the two pandas. The 12-hour journey was thoroughly planned, with plenty of bamboo and "panda snacks" to keep the two black and white bears happy. Their transport crates were lined with absorbent mats that will keep their transport boxes dry and odorless.

"It is important that the animals do not understand that something special is going on," said Andreas Ochs, Berlin Zoo's head veterinarian. The transport crates were designed in such a way that "the pandas won't be able to follow what's going on around them." 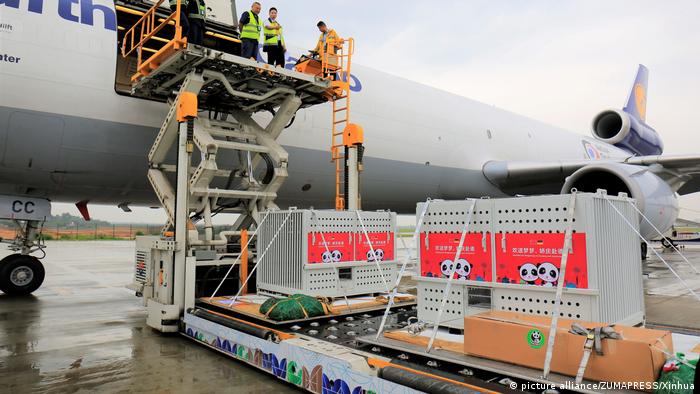 The pandas were shipped from China in crates

Most animals dispatched to Germany pass through Lufthansa Cargo's Animal Lounge in Frankfurt airport, considered to be the most advanced animal station in the world.

The zoo is investing heavily to host the pandas. The zoo will pay Beijing $1 million (890,000 euros) per year over 15 years to host the bears. Most of the funds will go towards the Chinese government's research program on panda conservation and breeding. 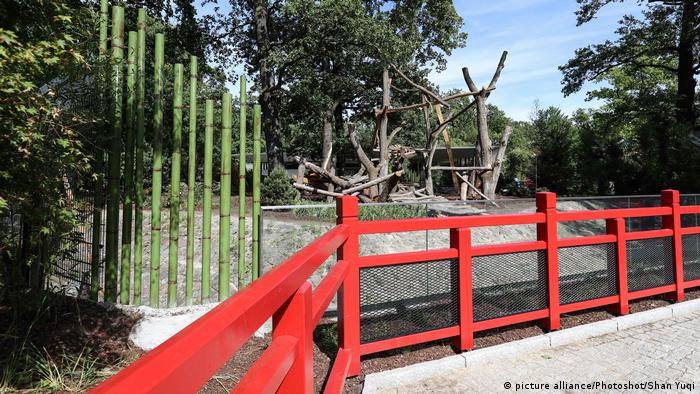 The pandas' new enclosure was waiting for them

Berlin Zoo has also built a special 5,500-square-meter (59,000-square-foot) home for the pandas, complete with a wooded climbing area and artificial stream.

Feeding Meng Meng and Jiao Qing bamboo will cost tens of thousands of euros per year.

Berlin Zoo has sought to stoke excitement, posting daily blog posts in the run-up to the pandas' arrival.

The pandas will be the zoo's star attraction - possibly the biggest since the world-famous baby polar bear Knut, who died unexpectedly six years ago. 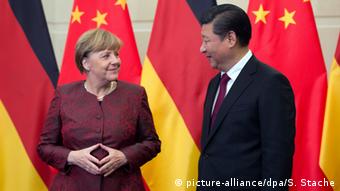 Merkel and Xi will officially present the pandsas

"The Chinese see the pandas as Chinese brand ambassadors," Bernhard Bartsch, from Berlin's Bertelsmann Foundation think tank. told the AFP news agency. "China obviously has an image problem in Europe, and giving pandas is a very smart and easy way to win hearts."

The "pandas will lend a very positive spin in German media to the visit by Xi Jinping in July," Bartsch added.

Only about a dozen other countries have received pandas as a special symbolic gift from China, including the Netherlands and UK.

Meng Meng and Jiao Qing will be the fourth and fifth pandas given to Germany.