Zoo Berlin has a fresh focus on helping protect wild animals in their natural habitat. Among other projects, it's sponsoring efforts in Congo to protect humanity's closest relatives: Bonobos. 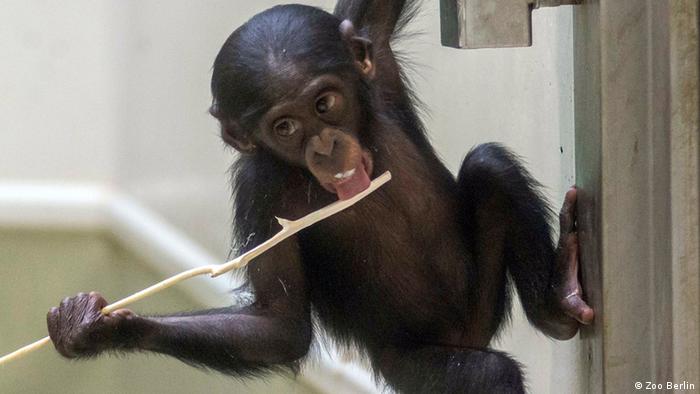 Tobias Rahde has one of the cooler jobs in Berlin, and his office building definitely has the best front yard of any in the city: When he walks out the door, his neighbors include macaques, parrots, giraffes and elephants.

It also includes a nearby enclosure housing bonobos (like the juvenile pictured above), a species of chimpanzee found only in Congo forests.

When DW visited the zoo in Rahde's company on a warm April day, the bonobos were hard at play, swinging on ropes and pushing around bunches of straw. To the amusement of a throng of zoo visitors watching, they were also engaging in quick sexual trysts with each other - a behavior the bonobos' matriarchal society is well-known for.

"Bonobos use sexual interaction as a way of reducing social stress, calming each other, lubricating social interaction - it's not primarily about reproduction," Rahde said.

Although, the reproduction bit has clearly been working as well. The dozen or so bonobos in the enclosure included several babies who clung to their mothers' bellies, their four little paws gripping their mothers' backs. 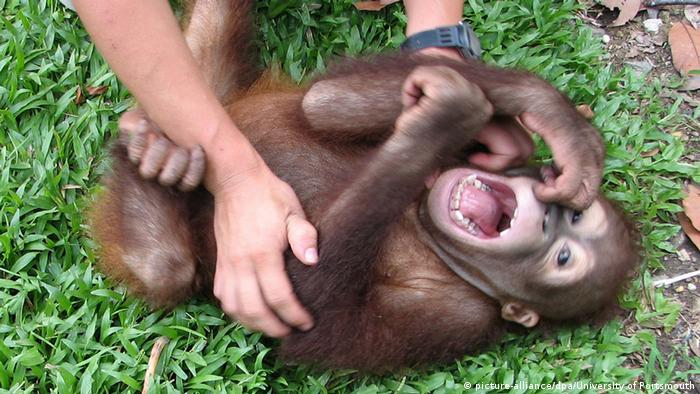 Orang utans (their species name means "people of the forest" in the Malay language) are humanity's next closest relatives after chimpanzees and bonobos. Like us, they enjoy a tickle

"Our bonobos' reproduction has been so successful that we're setting about gifting some of them to other zoos - we have too many now," Rahde said happily.

Some of the older apes recognized Rahlde and responded to his hand signals by rope-swinging in, even though Rahlde was separated from them by a thick plane of glass and surrounded by a crowd of zoo visitors.

"The bonobos' situation in the wild in Congo is pretty dire," Rahde said. Zoo Berlin, in cooperation with other conservation agencies, is doing what it can to help.

Conservation in the zoo - and in the wild

Rahde has been working at Zoo Berlin for 11 years. Now, he's been tasked by Zoo Berlin's new director with what may be the zoo's most important responsibility: sourcing new animals - and also helping protect them in the wild, in their native habitats. 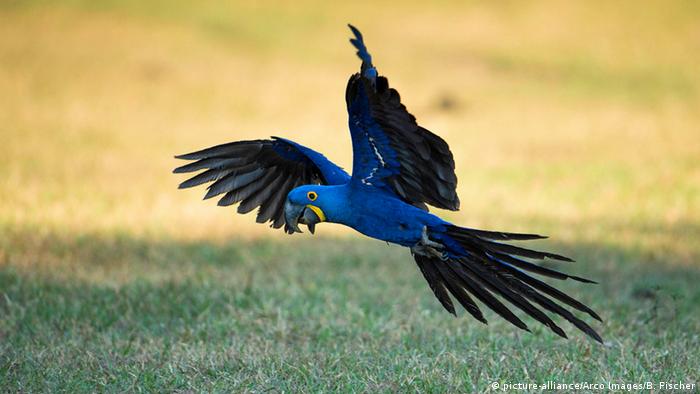 The flagrant beauty of animals like the hyacinth macaw makes them targets for poachers and collectors, depleting their populations in the wild and threatening their survival

Rahde's new responsibility is species protection curator, he told DW from a sunlit bench across from a group of baboons who were busy rock-climbing and fur-grooming. "That means I'll be going to different places in the world to pick conservation projects our zoo will contribute toward - places where we'll work in partnership with other agencies to protect animals in the wild."

He's also responsible for acquiring animals for Zoo Berlin, passing on surplus animals to other zoos, working toward reintroduction of threatened animals from zoos to the wild as conditions allow, and working out aspects of presenting the zoo's collection to the public.

Currently, Zoo Berlin is involved in 10 projects aimed at conserving animals in the wild - and the zoo intends to add more in future. Some of the most important: Protecting Sumatra orangutans in Indonesia; a project called Bonobo Alive where the zoo will be paying for ranger services in a major bonobo nature reserve in western Congo; a project to protect okapis (short-necked forest giraffes) in eastern Congo, and another to protect macaws in Brazil. All of these species are critically endangered.

"Conservation in Congo is really difficult - though it has improved," Rahde said. Parts of the country are drenched in conflict, with rival warlords fighting over mining resources including gold, rare earth, and diamonds. Spillover of violence into eastern Congo from ongoing genocidal conflicts in Rwanda and Burundi contributes to the difficult situation. 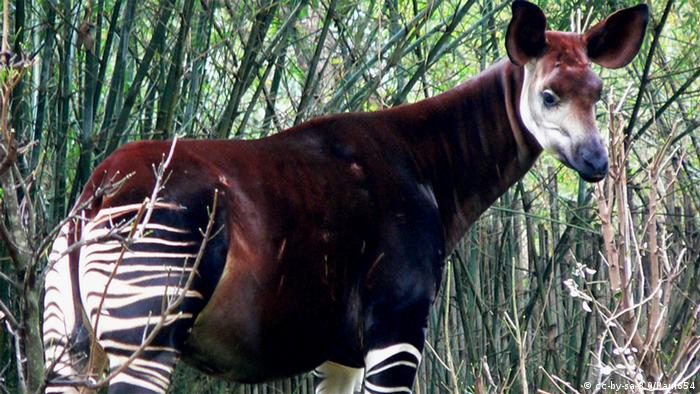 Take a giraffe, shorten its neck, dye its fur brown, make its butt striped and voila: you have an okapi

Unfortunately for okapis, the forests of eastern Congo are their native habitat. The few remaining animals living in the wild are under severe pressure from bushmeat hunters and armed gangs, Rahde said.

The nature reserve at Epulu was invaded by mercenaries in June 2012. They killed 14 okapi, several rangers and a zoologist as well. The slaughter was interpreted as a local warlord's retaliation against crackdowns on elephant poaching and illegal gold mining.

In South America, Zoo Berlin is leading a project to protect the world's largest species of parrot, a stunning bright-blue bird native to the Brazilian Pantanal. Known as "hyacinth macaws" (Anodorhynchus hyacinthinus), the two birds of the species in Zoo Berlin's collection, like the bonobos we'd visited earlier on our tour, also recognized Rahde upon our entry into their enclosure.

The macaws spent 10 minutes clinging upside-down to the wire fencing separating them from their human friend, allowing him murmur to them and stroke their feet. "We're hoping to breed them," the zoologist said. "They're beautiful, aren't they? And like most parrots, they're pretty smart." 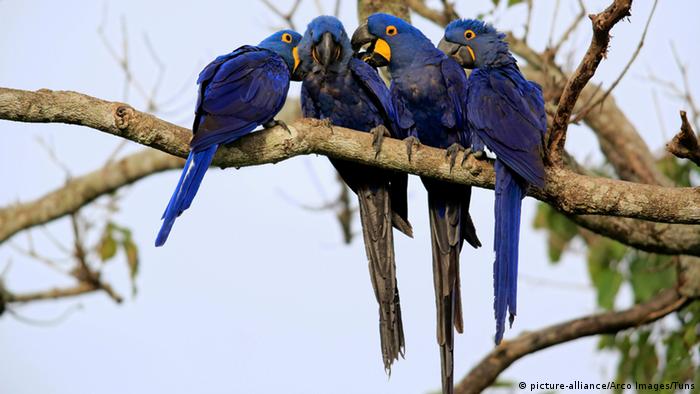 The zoo is involved in other conservation projects in developing countries, too: one for a rare frog at Lake Titicaca in Bolivia, another for a rare pheasant in Vietnam. In each case, it's not just about protecting one species. It's about protecting the habitat that species depends on, which has the knock-on effect of preserving the ecosystem, helping many other species.

Not all of Zoo Berlin's projects are in developing countries. The zoo is also helping acquire land in the lower Oder River valley, at the boundary between northeastern Germany and Poland. The area's wetlands compose one of the most important migrating bird stopovers in northern Europe.

The long-term plan is to return part of the area to wilderness, as part of an overall commitment by the German government to "re-wild" 10 percent of the country's surface area.

Zoo Berlin, like many other zoos and conservation agencies, doesn't have nearly as much money available for conservation-in-the-wild projects as it would like to have. That makes the zoo's efforts to encourage people to contribute funding especially important.

Rahde described the animals in the zoo as ambassadors for their cousins in the wild, because they create an emotional bond between people and animals. Charismatic species like bonobos "help loosen the purse strings" of potential donors, Rahde had said with a smile as we watched the bonobos romp.

Dian Fossey: the gorilla researcher in the mist

Great apes were her friends; interacting with human beings was not her thing. People criticized her temper saying she was egocentric and filled with bitterness. Researcher Dian Fossey was murdered 30 years ago. (26.12.2015)

No chance for Africa's lions?

The king of the animals is facing extinction. According to a study, the species, which is endemic to Africa, can only survive there on reservations. In some regions, populations have disappeared completely. (27.10.2015)