Ever since Knut drew millions of visitors to the Berlin Zoo in 2007, Germany has been known for its infatuation with baby polar bears. Knut's little brother - who still needs a name - may be its next animal celebrity. 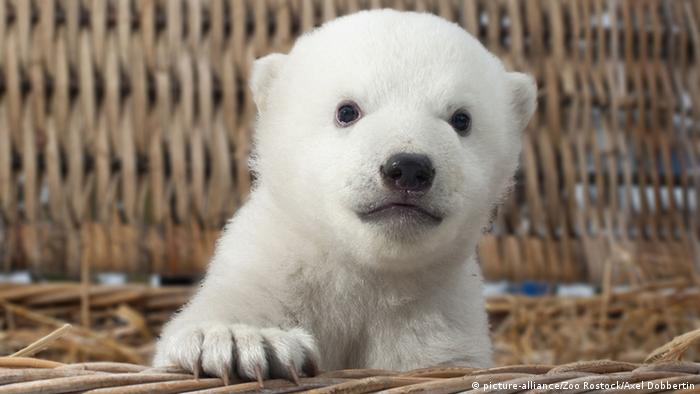 Rostock, a city in northeast Germany, has a new potential superstar. He's only two-and-a-half months old, weighs eight kilograms (about 18 pounds) and lives right by the Baltic Sea with his mother Vilma. It's a polar bear baby, a male one, a detail only recently discovered by zoo staff.

The little ball of white fur looks remarkably like Knut, the polar bear that drew people from all over the world to the Berlin Zoo in 2007. The resemblance is no coincidence: the new polar bear baby in Rostock is Knut's half-brother - the two share the same father, Lars.

The baby animal weighed only 600 grams at birth, not much larger than a guinea pig. Employees at the Rostock Zoo were overjoyed at his arrival; the last time a polar bear was born there was 10 years ago.

Looking for a name

Knut's little brother was born on December 3, is healthy and continues to gain weight. He already has enough energy to play with his mother, crawling all over her - but what he doesn't have yet is a name. After all, nobody even knew his gender until a few days ago. 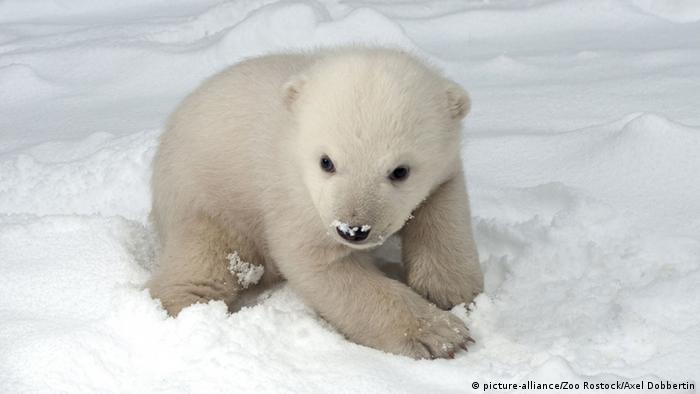 Now that this crucial issue has been determined, Udo Nagel, the zoo's director, has called on all animal lovers to suggest a name. The criteria: it has to be a simple name, one that "sounds Nordic." Suggestions can be submitted via email to the zoo's press department until March 10. The person whose name is selected will win two nights at a local hotel and an invite to the bear's christening.

The baby's first public appearance is slated for the end of March. Until then, he remains alone with his mother, because the first three months should be as quiet as possible for the little family. Unnecessary stress should be avoided at all costs.

Famous brother Knut was born in December 2006 at the Berlin Zoo. He was the zoo's first newborn polar bear to survive past infancy in more than 30 years, and became a huge attraction.

One reason for his superstardom, aside from his natural cuteness, was his perceived humanity - he was raised by a zookeeper after being rejected by his mother, and played with his "adoptive father" like a puppy.

But that fame wouldn't last, with Knut dying in 2011 of a brain infection.

The Rostock Zoo might be in for a treat: Knut's home in Berlin reported a 30 percent increase in visitors in 2007. The polar bear, who earned the zoo millions of euros in revenue through the sales of tickets and merchandise, had fans all over the world.

A new star attraction at the Berlin Zoo

She’s just a few weeks old, but little Rieke is already a star. The orangutan baby was introduced to the public on Saturday, to the delight of hundreds of visitors at the Berlin Zoo. (09.02.2015)

A statue of Germany's most beloved polar bear, Knut, was unveiled at the Berlin Zoo where he lived. Knut's sudden death last year saddened his fans from around the world. (24.10.2012)

A polar bear has been killed after it injured a French woman at a campsite on the Svalbard Archipelago north of Norway. The bear entered a tent before wounding the victim's arm.

Staff at Detroit zoo said that the male polar bear had previously mated with other females without showcasing any aggressive behavior.