After several fruitless attempts, Berlin is celebrating its first ever panda birth. The mother, Meng Meng, and her two new cubs are doing well, the zoo director has revealed. 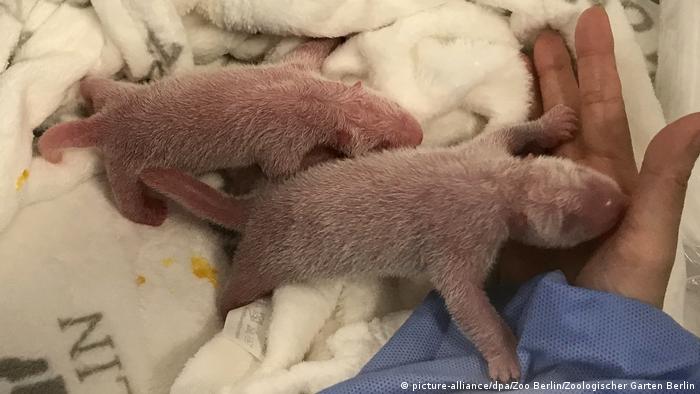 Giant panda Meng Meng has given birth to twin cubs, the zoo announced on Monday. The two babies were born within an hour of each other. After the first birth, the mother gently placed her newborn on her stomach to warm it up. A short time later the second panda baby was born.

Zoo director Andreas Knieriem said that although Meng Meng was a first-time mother, she was "looking after her cubs in an exemplary manner." Mother and babies were thriving, he revealed, adding that the young animals had to "drink every two to three hours ... and needed their mother to warm them."

It was the first ever panda birth in Berlin. The pink twins bear no resemblance to their black and white furry parents.

Meng Meng and the cub's father, Jiao Qing, have been living in Berlin Zoo since summer 2017. The two pandas are on loan from China and come from a reservation in Chengdu.

""What fantastic news! The whole of Berlin is delighted about the new arrivals!" said Berlin's mayor, Michael Müller.

Berlin will not be able to keep the offspring. As part of the panda's loan agreement, the cubs, and any future siblings, will be returned to China after two to four years.

Meng Meng and Jiao Qing (whose names mean "Sweet Dream" and "Darling" in Chinese) made headlines when they arrived at the Berlin Zoo in 2017 as part of a 15-year loan agreement that Chancellor Angela Merkel worked out with China.

The newborn pandas will not be on public display at the zoo for the time being.