Palestinians in Jerusalem neighborhood fear for their future | Middle East | News and analysis of events in the Arab world | DW | 01.08.2021

Palestinians in Jerusalem neighborhood fear for their future

Four Palestinian families could soon find out whether they will be evicted from their homes in occupied east Jerusalem to make way for Israeli settlers. The move would leave them homeless — and could spark new tensions.

Muna al-Kurd, a 23-year-old university graduate living in the Sheikh Jarrah neighborhood in occupied east Jerusalem, is facing possible eviction along with her family from their home of more than 60 years.

"All probabilities are on the table. They might reject our appeal which means expulsion, or they might postpone again," said al-Kurd in a video update on social media a few days ago. "I think they will decide in favor of the settlers, not the Palestinians," she added, looking across the street where nationalist religious settlers already took over a house a decade ago. 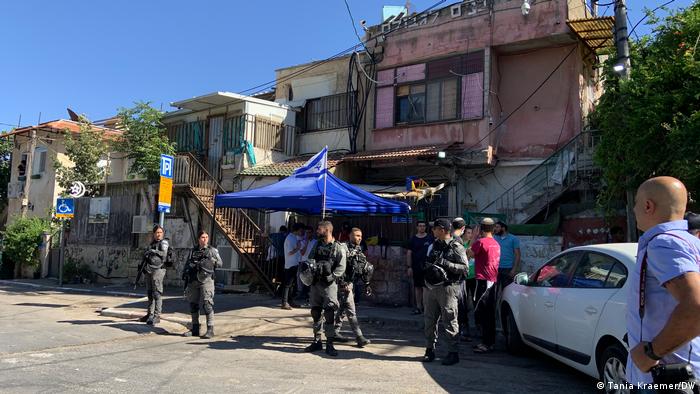 Nearby homes have already been claimed by nationalist religious settlers

On Monday, Israel's Supreme Court could decide the fate of al-Kurd's family, along with that of three other families threatened with eviction from their homes. Earlier this year, a lower Israeli court ruled in favor of the settler organization that claims ownership of the land, paving the way for the eviction of the four families.

Using their last legal option, the families have submitted a request to file an appeal to Israel's Supreme Court. The pending eviction has already sparked weeks of protests and is believed to be one of the reasons for the 11-day military conflict between Israel and Hamas in Gaza in May.

But a final decision is still up in the air. Last week, Israeli media reports quoting an unnamed government official suggested the Israeli government might want to seek a freeze in the decision, or won't implement an eviction, so as not to further inflame tensions in the city. A hearing by the Supreme Court on that matter had previously been postponed.

The eviction plans have been sharply criticized by the international community, including the European Union, the United States and the United Nations. The US State Department, in particular, has previously expressed concern; Israel's new prime minister, Naftali Bennett, is expected to visit Washington in the coming weeks. While the situation has slightly quietened down since May, and media attention moving on to other topics, the residents' uncertainty over their future continues. "Imagine yourself in my place, you live in your house, with all of your memories in your home, the home that is yours and you own," said al-Kurd. "Then comes someone and knocks on your door and demands that you get out, this is not your house, this has become my house. Would you accept this?"

Together with her twin brother, al-Kurd has become one of the young voices of a protest campaign against the evictions on social media and in the street.

Decadeslong battle over the neighborhood

A few hundred meters away, on a hilly spot that overlooks the leafy green neighborhood, Chaim Silberstein visits a small Jewish settlement enclave he helped establish decades ago. It's located near the tomb of Simon the Just, or Shimon HaTzadik, an ancient Jewish high priest who is believed to be buried here. The tomb is particularly revered by ultra-Orthodox Jews who come to the area to pray.

"Dozens of Jewish families lived here until 1948," said Silberstein, referring to the Arab-Israeli war of 1948, also known as the Israeli war of independence, after which Jordan would administer the eastern part of Jerusalem which includes the Sheikh Jarrah neighborhood. During the Six-Day War between Arabs and Israelis in 1967, Israel captured and later annexed east Jerusalem, in a move not recognized by most of the international community.

"In 1948, the Jordanians illegally occupied all of eastern Jerusalem, including this area, and after 1967, the Jews who were evicted from their homes, from their properties, wanted to return to them. Most were unable to," explained Silberstein who, as founder of the nationalist group Keep Jerusalem, aims to reestablish a Jewish neighborhood here.

"We found the original purchases belonging to two religious trusts in Jerusalem that had purchased this four-acre property in 1875," he said. "Together with a group of investors we purchased the rights to the property in 2003 and then began a process of clarifying the legal status of the Arab tenants of this neighborhood. And the process went through the court system until it reached the Supreme Court."

Silberstein added that the courts had ruled that "the Jewish ownership was authentic and was real and valid."

Human rights activists, including Hagit Ofran of the Israeli anti-settlement organization Peace Now, have described the legal basis of the court cases as discriminatory. They point out that Israeli law prevents Palestinians from claiming properties lost in the conflict in 1948. 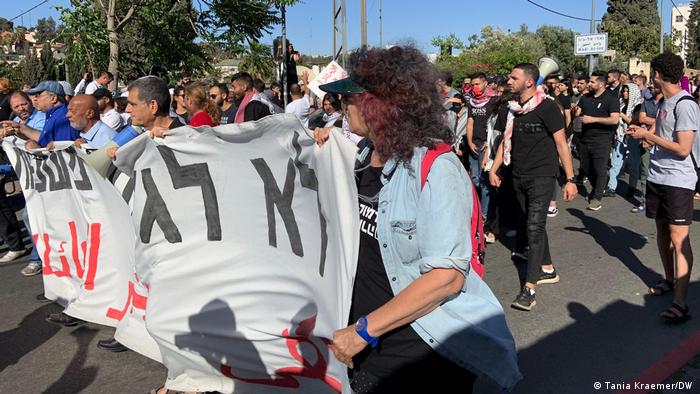 "This is the basis, or the discriminatory basis, of all the court cases of eviction that we are seeing in Sheikh Jarrah and in Silwan. Settlers manage to take over the ownership from before '48 and now they are suing Palestinians out of their homes," she said.

According to Peace Now, more than 100 families are in various stages of eviction proceedings filed against them by settler organizations — in Sheikh Jarrah but also in Silwan, a neighborhood located south of Jerusalem's Old City.

'The house is not just a home — it's everything'

For many, the decadeslong battle over Sheikh Jarrah symbolizes the wider Palestinian-Israeli conflict. To Palestinians, who want to see east Jerusalem as the capital in their future sovereign state, it's about decades of Israeli military occupation. Israel, however, views Jerusalem as its undivided capital, and right-wing nationalist settlers want to broaden their presence in the eastern parts of the city.

During the 1948 conflict, the al-Kurd family was displaced from the northern city of Haifa and settled here in the 1950s together with several other Palestinian families who fled from west Jerusalem and other locations. The Jordanian government and UNRWA, the then newly created UN relief agency for Palestinian refugees, had offered a housing project for Palestinian refugees in the neighborhood in return for these families giving up their refugee status. But in recent years, the residents who have lived in Sheikh Jarrah for decades have been fighting in court to remain there.

"The house is not just a home — it's everything. All the memories, the children are born here, my wife and I got married here," said Nabil al-Kurd, Muna's father, adding that he worries most about his children's future. "They have to deal with house demolitions, settler invasion and other strange things happening that don't exist in other parts of the world."

The al-Kurds have already lost an addition to the house that Muna's father built for his children; an Israeli settler from the US moved into the building a decade ago.

"My daughter never slept in this room for even one night," he said. Now, despite a lengthy court battle, the family could lose their house altogether.

Coronavirus: Israel to offer third COVID shot to over 60s

Such a large-scale booster campaign is a world-first. Health officials are worried that the vaccine's efficacy reduces over time, but some critics think Israel should wait.