Pakistan struggling to eradicate malnutrition in children | Asia | An in-depth look at news from across the continent | DW | 21.06.2019

Despite abundance of food, child malnutrition is rife in Pakistan. Four in 10 children under 5 years of age are stunted in the country, according to a government survey. 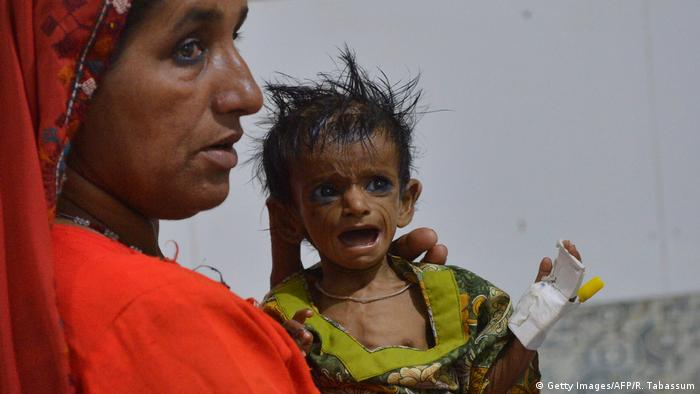 The malnutrition and neonatal ward of the government-run civil hospital in Mithi city, in Pakistan's southern Sindh province, has hundreds of child patients. One of them is Mukesh, a frail, listless toddler showing no signs of motion. A sign on his crib says he is 3 years old, but he hardly looks that age.

His mother, 36-year-old Ragini Mehgwar, gave birth to six children, but only two managed to survive. Now, Mukesh is battling for his life. "We are poor laborers living on daily wages. We rely on our livestock for income and are unable to make ends meet. There is a frequent shortage of food in the house," Mehgwar told DW.

Mukesh's plight is shared by millions of other children in Pakistan. According to the country's National Nutrition Survey for the years 2018-19, one in every three children is underweight.

The study assessed the nutritional status of 115,500 households across Pakistan. The primary focus of data collection was on children under the age of 5, adolescent girls, and women of child-bearing age.

According to the World Health Organization's (WHO) child growth standards, stunting is a harmful complication of malnutrition and can simply be defined as being shorter than the average height for one's age.

Read more: Diet a top cause of illness and death

Wasting is also a strong predictor of mortality among children. 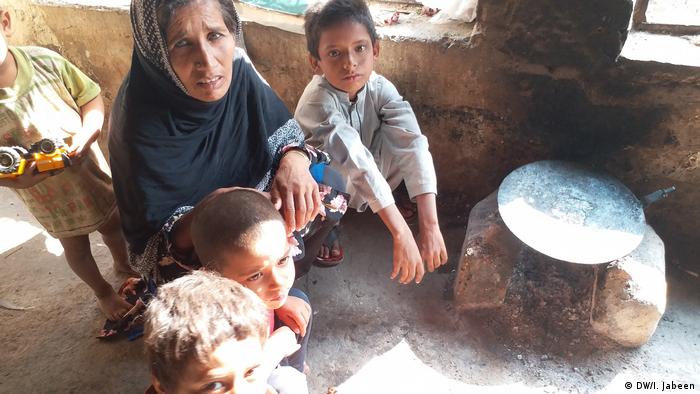 Ram Ratan, the medical superintendent at the Mithi hospital, has been witnessing the malnutrition crisis for the past several years. He said many children in the region fall victim to malnutrition and undernourishment because of the weakness of their mothers, many of whom have delivered several babies without enough gap between pregnancies. "Mothers' poor nutrition and diet patterns are the major causes of babies' death and malnutrition," he said.

This is compounded by Pakistan's patriarchal culture and gender-based discrimination, say observers. In most households, women often have less food to eat than their male relatives. And the cultural norm of women eating after the male members of the family finish their meals as well as young-aged marriages have also contributed to the problem.

Bearing large numbers of children from a young age not only takes a toll on women's health, but also impacts the well-being of the fetus and the ability to breastfeed a newborn.

"Children who are born small due to poor maternal nutrition start life with a huge disadvantage. Stunting, for example, is one of Pakistan's biggest nutrition-related challenges, and has its roots in pregnancy when mothers do not get adequate nutrition," Aida Girma, country representative for the UNICEF in Pakistan, told DW.

In Pakistan, only 38% of babies are fed breast milk exclusively during their first six months in line with UN recommendations.

"There are also nutrition-sensitive interventions that must be equally emphasized such as ending open defecation, addressing food security, providing care giving resources at maternal, household and community level," Girma said.

According to the Global Nutrition Report 2018, there are 10.7 million stunted children in Pakistan. Owing to widespread poverty, many families cannot afford a nutritious diet with the recommended intake of protein, fat, minerals and vitamins.

Prime Minister Imran Khan's government has expressed concern about the stunted growth of children in the country, which has the third highest rate of stunting among young children in the world.

Pakistan's state minister for health, Zafar Mirza, also said that the federal government prioritized the country's nutrition agenda and would work closely with the provinces for informed and effective interventions in the sector. "As difficult a task as it may seem, we will ensure that we save our children from malnutrition," he said shortly after his ministry revealed the survey's results.

Authorities are investigating whether a doctor in the Pakistani district of Larkana deliberately spread HIV. More than 500 people, including 410 children, have been diagnosed with the virus in the past few weeks. (18.05.2019)

Pakistan struggles to save pangolins from poachers

Despite efforts of local conservationists, demand from China for scales, meat and traditional medicine has made the endangered pangolin the world's most trafficked animal. (20.06.2019)

The recent killing of a young Pakistani blogger, known for criticizing the nation's powerful military, has once again reignited the debate about the deteriorating freedom of expression in the country. (18.06.2019)