The ruling PTI party has failed to win a majority in the 100-member Senate, with many lawmakers switching allegiance and voting for opposition candidates. Prime Minister Khan finds himself in a precarious position now. 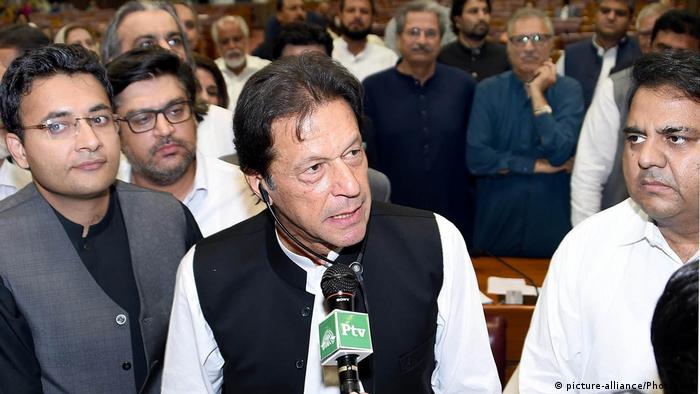 Prime Minister Imran Khan will seek a vote of confidence in the lower house of Pakistan's Parliament, the National Assembly, following a major setback in the upper house elections on Wednesday. The move is aimed at restoring confidence in Khan's leadership after his Pakistan Tehreek-e-Insaf (PTI) party failed to win a majority in the 100-member Senate, despite having a numerical advantage in the lower house.

Members of the National Assembly in the capital, Islamabad, and four provincial assemblies vote for the Senate members. Upper house lawmakers are elected for six years, however, all of them are not elected at the same time.

Ruling parties generally secure a majority in the Senate. Since PTI and its allies won the 2018 general elections, many experts were expecting Khan to win the upper house also.

Opposition parties on Thursday demanded that Khan step down from premiership after the Senate setback. Khan's party has rejected the calls.

"Imran Khan and his party have taken a unanimous decision to take a vote of confidence from Parliament to confirm he still has a majority (in lower house)," Foreign Minister Shah Mahmood Qureshi told media.

Constitutional experts say the reason behind holding a vote of confidence for the premier is to determine which party members switched allegiances in the Senate elections, as, unlike the upper house election, National Assembly lawmakers cast their votes through an open ballot.

"Those who revolted against the PTI could be disqualified under election laws," Osama Malik, an Islamabad-based legal expert, told DW.

Securing a vote of confidence on Saturday will also boost the morale of the ruling party. However, experts say the damage has already been done.

Not having a majority in the Senate means that Khan will have difficulties passing crucial legislation. At the same time, the opposition parties, which have been staging mass street protests to oust Khan, now feel more emboldened than ever.

"This is the biggest upset in Pakistan's parliamentary politics. Khan is now a lame duck premier and has only one political option: dissolve the National Assembly and hold midterm polls," Mushahid Hussain, a senator belonging to PML-N party, told DW.

"The country's political scenario has changed. The government is now on a back foot, worried about its majority and loyalty of its own lawmakers," Hussain said.

Salman Masood, a political analyst and editor of The Nation newspaper, told DW that the ruling party felt embarrassed after the Senate results.

"The government is crying foul and claiming that the opposition used money to sway the loyalty of its members, but it is a fact that opposition parties have received a major boost. They will now put more pressure on the government," Masood said.

Mosharraf Zaidi, an Islamabad-based political analyst, differs. "I don't think that Khan will be particularly weakened by the Senate polls. He is likely to win the vote of confidence, but it will certainly reenergize the opposition," Zaidi told DW.

Alluding to the country's powerful military generals, Hussain said that, after the Senate election, "those who installed Khan in 2018 will also reevaluate their support for him."

Khan will find it almost impossible to pass legislation in Parliament, as a majority in the Senate is crucial. That means he will have to rely on President Arif Alvi, a party loyalist, to pass presidential ordinances to keep the government functioning.

But major constitutional changes will remain beyond Khan's reach. For instance, Khan has wanted to scrap the 18th constitutional amendment, which was promulgated by former president Zardari's government (2008-2013) and which gives more administrative and financial powers to provinces. It is unlikely now that Khan can centralize all powers in Islamabad.

Analyst Zaidi believes that it is not a bad thing that the ruling party does not have a majority in the Senate. "Sooner or later, Khan has to realize that serious and sustained reforms require political consensus," he said. "No party can afford constant aggression."