Pakistan: Why is the military taking over civilian posts?

Experts say that under Prime Minister Imran Khan's government, the Pakistani military is increasingly encroaching on the civilian sphere, with many generals now heading administrative and executive institutions. 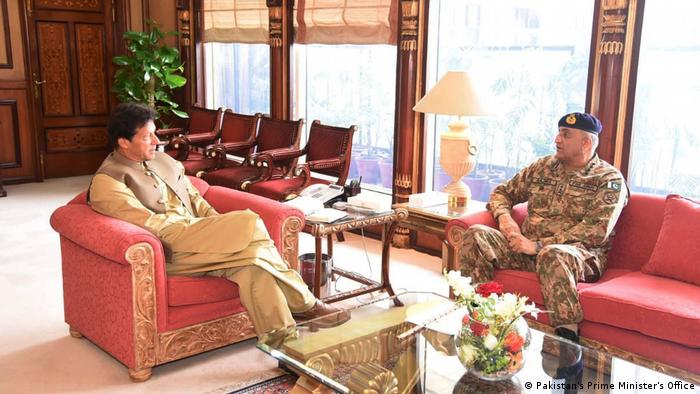 The number of military officials leading civilian institutions has dramatically increased since Prime Minister Imran Khan came to power in 2018.

The recent appointment of Brigadier (retired) Bilal Saeedullah Khan as director general of the National Database and Registration Authority (NADRA) has sparked uproar in the country. On Thursday, the Islamabad High Court issued notices to the Interior Ministry and NADRA regarding Khan's appointment.

In the past two years, several other military officials have grabbed important government positions, which have traditionally been under the civilian domain.

In 2019, General Asim Saleem Bajwa was appointed as the chairman of the China-Pakistan Economic Corridor (CPEC) Authority. Air Marshal Arshad Malik has been serving as the chief executive of the state-run Pakistan International Airlines since April 2019. Major General Amer Nadeem was appointed the chairman of SUPARCO, the national space agency, in 2018.

Even diplomatic positions, which have largely been held by civilians since Pakistan's independence from British rule in 1947, have been taken over by the generals. In January, Khan's government appointed General Bilal Akbar to the post of Pakistan's Saudi Arabia envoy.

"Besides the mission in Riyadh going back to a general, ambassadors in Brunei, Jordan, Syria, Sri Lanka, Ukraine, the Maldives, Nigeria and Libya are retired armed forces officers," wrote Pakistan's Dawn newspaper.

Is Khan returning the favor?

Opposition parties criticize Khan for being a "puppet" of the army. Liberal analysts in the South Asian country say that the powerful military rigged the 2018 general election to bring Khan's Pakistan Tehreek-e-Insaf (PTI) party to power, a claim both the military and Khan deny.

Critics say the military enjoys a free hand under Khan's government, and that it is consolidating the power that it somewhat lost under Khan's predecessor, Nawaz Sharif.

Khan, they allege, is returning the favor to the military by allowing generals a bigger role in the country's governance, foreign policy and economy.

"Imran Khan is the civilian face of a military state," Tauseef Ahmed Khan, a Karachi-based political analyst, told DW, adding that Khan is just trying to appease the military establishment to stay in power.

The analyst says that these military appointments are creating resentment and frustration among civilian bureaucrats, who see their progress being hindered by the army.

The military, which has collectively ruled Pakistan for half of the time since its independence, has always had an upper hand in the country's affairs, but prior to Khan's ascent to power its role was largely limited to defense and foreign policy affairs. Tauseef Ahmed Khan says it is the first time in the country's history that the generals are encroaching on civilian areas with such ferocity.

"They are now either heading civilian institutions or holding key posts there. It seems to me that the military is now trying to control the country's domestic policies too," Khan said.

The analyst said that the generals do not favor the country's two major opposition parties – the Pakistan People's Party and the Pakistan Muslim League Nawaz – because they, to an extent, tried to resist the army's increasing dominance in civilian affairs.

Other experts deny this claim, pointing to several military appointments under previous governments also. They, however, admit that the number of these appointments has increased manifold in the past two years.

Corruption and incompetence: reality and perception

Prime Minister Khan justifies the military appointments, saying they are being done on merit. There is a widespread perception in the country that politicians and civilian bureaucracy are incompetent and corrupt, whereas the military is efficient and well-organized.

Many politicians and civilian bureaucrats are currently facing corruption charges, which are being probed by the country's National Accountability Bureau.

"Army officers manage state-run institutions in an efficient way. The Water and Power Development Authority is headed by a military official and has accomplished many important tasks, including construction of dams and several energy projects," Amjad Shoaib, a retired military general and defense analyst, told DW.

Shoaib rejected the criticism of military appointments as an "anti-army propaganda."

"Nawaz Sharif's party is behind this nefarious propaganda, which is aimed at defaming the army. It is a dangerous trend to blame the military for the country's problems. It must stop," he added.

Politicians, on the other hand, say the incompetence perception is part of the military propaganda. They also say that the military considers itself above the law and is not answerable to anyone.

"When we summon civilian bureaucrats, they show up and pay heed to our recommendations. When we call upon the military officials, who are heading civilian departments, they don't care to respond," Usman Kakar, an opposition lawmaker, told DW.

Kakar also says that military-run institutions see more malpractices than the civilian ones. "The department responsible for dealing with the coronavirus pandemic told us that it spent rupees 2.5 million (€13,000, $16,000) on a single COVID patient. When we called the military officials working in that department to come to our parliamentary committee and explain why such a huge amount was spent, they didn't care to respond," Kakar alleged.