Pakistan protests: The right-wing challenge to PM Imran Khan | Asia | An in-depth look at news from across the continent | DW | 01.11.2019 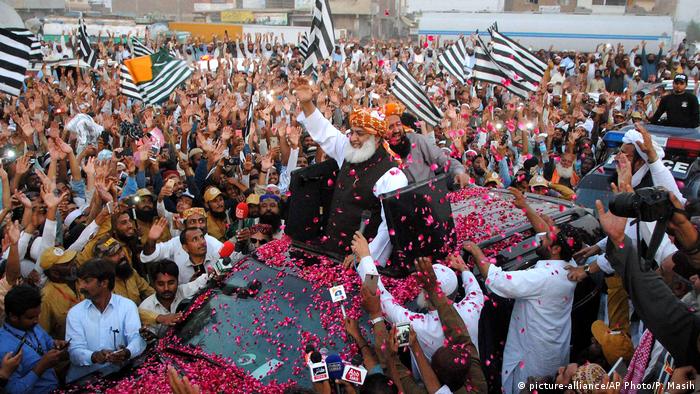 Starting their rallies in the southern city of Karachi on Sunday, anti-government protesters marched through various major cities of the country, finally reaching their destination, Islamabad, on Thursday. The demonstrators camped near the capital and plan to protest for days – maybe weeks. Their sole demand is that Prime Minister Imran Khan, who came to power in August last year, must tender his resignation to pave the way for fresh elections

The rally is led by Maulana Fazlur Rehman, a powerful religious figure and head of the Jamiat Ulema-e-Islam (JUI-F) party, who claims that PM Khan came to power through rigged elections.

Rehman said that his "Azadi March" (Freedom March) has transformed into a national movement, which was bound to succeed.

"From Karachi to Lahore and to Islamabad, the people have decided that there was no more room for this government," Rehman said, adding that he was fighting for the "survival of the real democracy" in the country.

Is military backing the government?

Mufti Abrar Ahmed, a spokesman for the JUI-F, lashed out against Khan on Sunday, saying that the "illegitimate" government came to power through the army's support.

Although the opposition parties denounced last year's general election as "rigged," they chose not to immediately launch protests. But the Khan administration's heavy-handedness against opposition politicians and the country's deteriorating economy have given them the impetus to finally attempt to dislodge his government.

Khan has been accused of receiving indirect support from the country's powerful military — a claim denied by both Khan and the army. Sharif's supporters say their party was not given a level playing field in the run-up to the July 2018 elections, with the judiciary exclusively targeting PML-N officials and the caretaker government unleashing a massive crackdown on PML-N activists.

Talking to local journalists last week, Khan said the army fully backs him against the opposition's attempts to oust him.

But some reports in local media claim that the powerful military is split on its "unconditional" support to the premier.

Khan came to power after winning a simple majority in the 2018 parliamentary polls on promises to improve the country's economy and provide jobs. But his critics say he has so far not been able to honor his commitment to the masses.

With inflation climbing to 8%, the rupee losing a third of its value over the past year and foreign exchange reserves barely enough to cover two months of imports, Khan's government was forced to turn to the International Monetary Fund (IMF) in May for a bailout package

The military, which has large stakes in Pakistan's economy, is also reportedly wary of the government's "underperformance."

But the centrist parties, such as the PML-N of former PM Sharif and the PPP of Bhutto-Zardari, are not at the forefront of the anti-government movement. Instead, it is the head of an Islamic party who is mobilizing masses to dislodge Khan.

The "Azadi March" organizers even "banned" women from taking part in the rallies, drawing criticism from the country's liberal groups that dubbed it "anti-democracy."

"I am not supporting this rally because women are not allowed to participate in it," Saba Chauhdhry, a human rights activist, told DW.

"All citizens have been affected by this government's policies. Pakistani women have always been at the forefront of pro-democracy movements. Any movement that excludes women is bound to fail," Chaudhry added

Pakistan's liberal sections, however, are split over their support for Rehman's march. Some say that the main objective of all anti-government groups should be to oust PM Khan, so it is unimportant who is leading the protests. Others are of the view that any right-wing attempt to dislodge the current administration would further embolden the country's Islamists – who are already quite powerful – and will leave little room for the liberal parties to implement their agenda.

The driving vision for the opposition parties – both liberal and right-wing – is to end the military's alleged interference in politics and uphold civilian supremacy in Pakistan. The two sides differ on their interpretation of civilian supremacy though. Rehman and the likes want the country to be governed by Shariah, albeit within the space of parliamentary democracy. For rights groups, the view is unacceptable. The military may use this division to its benefit, say experts.

Pakistan's prime minister is facing a backlash over his economic policies, with public discontent growing over increased taxes and rising inflation. On Saturday, a countrywide traders' strike paralyzed business. (14.07.2019)