Pakistani PM Khan faces a tough political challenge as an anti-government march to topple his government set off on Sunday. Khan's woes have been aggravated by a deteriorating economy and accusations of bad governance. 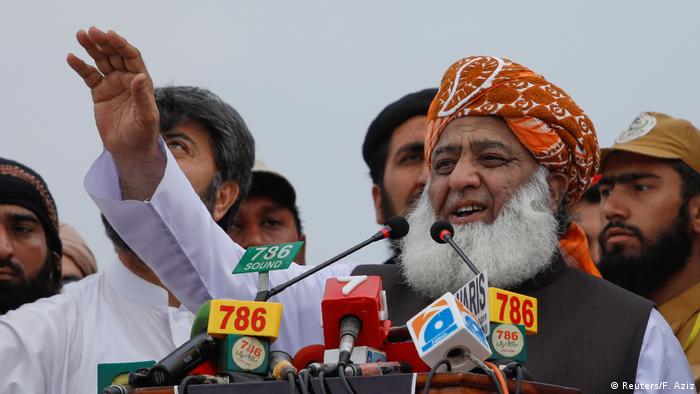 Thousands of supporters of a major religious political party gathered Sunday in Pakistan's southern city of Karachi to start an anti-government march on the capital, Islamabad.

The rally was led by Maulana Fazlur Rehman, a powerful religious figure and head of the Jamiat Ulema-e-Islam (JUI-F) party, who claims that Prime Minister Imran Khan came to power last year through rigged elections.

"Prime Minister Imran Khan will have to resign. Hundreds of thousands have gathered in Karachi; what will the government do when people from across the country reach Islamabad?" he told rally participants in Karachi.

The rally participants — expected to be in the hundreds of thousands by the time they reach Islamabad — plan to stage a sit-in protest outside the capital, with a possibility of further rallying closer to the prime minister's house.

"I will announce the future course of action in Islamabad," Rehman said in Karachi.

Although a religious leader, Rehman is a supporter of parliamentary democracy and has served under previous governments.

Mufti Abrar Ahmed, a spokesman for the Jamiat Ulema-e-Islam party, said Sunday that Rehman would lead the protesters' caravan. He lashed out against Khan, saying that the "illegitimate" government came to power through the army's support.

Although the major political parties denounced last year's general election as "rigged," they chose not to immediately launch protests. But Khan's heavy-handedness against opposition politicians and the country's deteriorating economy have given them the impetus to finally attempt to dislodge his government.

Khan has been accused of receiving indirect support from the country's powerful military — a claim denied by both Khan and the army. Sharif's supporters say their party was not given a level playing field in the run-up to the July 2018 elections, with the judiciary exclusively targeting PML-N officials and the caretaker government unleashing a massive crackdown on PML-N activists.

Talking to local journalists earlier this week, Khan said the army fully backs him against the opposition's attempts to oust him.

Khan came to power after winning a simple majority in the 2018 parliamentary polls on promises to improve the country's economy and provide jobs. But his critics say he has so far not been able to honor his commitment to the masses.

Although Khan launched an austerity drive to reduce government expenses, critics say the move has been largely superficial, as the PM's team has no real economic plan to fix Pakistan's serious structural issues.

With inflation climbing to 8%, the rupee losing a third of its value over the past year, and foreign exchange reserves barely enough to cover two months of imports, Khan's government was forced to turn to the International Monetary Fund (IMF) in May for a bailout package.

"The economy has nosedived, prices of essential commodities are touching new heights and people are living in abject poverty. So it is necessary to send him [Prime Minister Khan] packing," Soomro told local media.

Pakistan has secured a multibillion-dollar bailout package from the IMF in a desperate attempt to get out of a crippling economic situation. But the road to strengthen the nation's finances is tough. (13.05.2019)

Despite allegations of voter fraud, Imran Khan's victory as Pakistan's new prime minister has unleashed jubilation among young Pakistanis. DW takes a look at their reactions on social media. (27.07.2018)