Pakistani youth celebrate Khan′s election on social media | Asia| An in-depth look at news from across the continent | DW | 27.07.2018

Despite allegations of voter fraud, Imran Khan's victory as Pakistan's new prime minister has unleashed jubilation among young Pakistanis. DW takes a look at their reactions on social media. 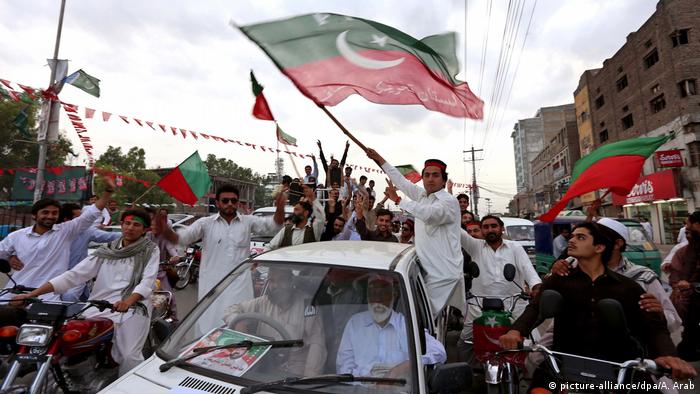 After Pakistan's parliamentary elections concluded on July 25, political analysts and commentators had reasonable doubts about the polls being free and fair.

Nevertheless, the outcome of these elections has demonstrated that most of the Pakistani people are seeking new leadership to steward the country's politics.

They were fed up with the game of musical chairs between the two main political parties, the Pakistan Peoples Party (PPP) and the Pakistan Muslim League-Nawaz (PML-N), which has been going on since 1988.

Around 17.4 million people between the ages of 18 and 25 were supposed to cast their votes for the first time this time around. This number, combined with 28 million voters between the ages of 26 and 35, accounts for the youth vote in Pakistan — some 43 percent of 105 million registered voters.

Changing of the guard?

It is true that even during the civilian rule, the Pakistani army was not a silent spectator. Yet Pakistan's major political parties had ample opportunity to make the people a priority in policymaking and governance.

Instead, political parties were involved in real or perceived corruption, transferring wealth out of Pakistan and undermining government institutions that attempted to question their policy. The people did not have much choice.

The election of Imran Khan as the new leader of Pakistan has a long and rather fascinating history. He emerged as a cricket hero in the 1980s and his charisma, good looks and good deeds, like the building of a cancer hospital, made him very popular.

Without any previous experience in politics, he is expected to start with a clean slate.

This is why the younger generation in Pakistan is especially happy.

Whether or not the army brought Khan into power may become irrelevant, if he can prioritize the welfare and happiness of the people and his country, say observers.

It remains to be seen whether the 2018 election marks a change for the future of Pakistan. What the election seems to tell us is that people were fed up with the game of musical chairs between the PPP and the PML-N that has been going on since 1988, and are welcoming the promise of change.