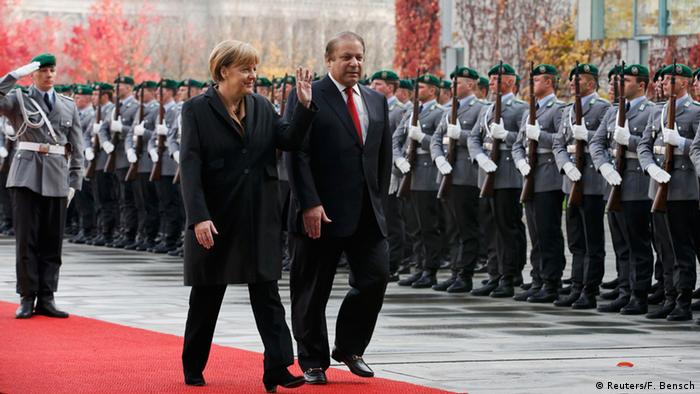 German Chancellor Angela Merkel met with Pakistani Prime Minister Nawaz Sharif on Tuesday and held talks that focused mainly on trade and fighting terrorism. In a press conference, Sharif told reporters how keen his nation is for German investment, although Merkel cited security concerns in her own comments.

"Pakistan is facing an acute shortage of energy," Sharif said before praising Germany's role as a leader in renewable energy and adding that several German firms were keen to invest in Pakistani power companies. However, Merkel said that Pakistan needed to create "a climate that is friendly for investors," meaning that it must beef up its security if it seeks an increased German stake its economy.

Germany is Pakistan's fourth-largest trading partner. Bilateral trade amounted to 1.9 billion euros in 2013. Although Germany's economic involvement in Pakistan has been primarily in the form of exports; specifically chemical products, machinery, and vehicles, Pakistan is courting German investors not only for the energy industry, but in the agricultural and environmental sectors as well.

Stopping terrorists 'at all costs'

Merkel's concerns stem from the fact that Pakistan has been plagued by Islamist violence since it backed the US-led coalition to topple the Taliban in Afghanistan in 2001. Sharif assured Merkel that his country would "overcome terrorism at all costs."

Shortly before Sharif left for Berlin, he assured Afghan President Ashraf Ghani that he supported Ghani's offer to hold peace talks with the Taliban, who also control some parts of Pakistan along the border. The countries have been urged to improve their relations.

The German chancellor echoed Sharif's hope for a safe Afghanistan, saying: "We want as much as you do that what has been achieved in Afghanistan is not threatened ... a stable Afghanistan is in the best interest of Pakistan."

Merkel also confirmed on Tuesday that the German army will remain in Afghanistan after the NATO combat mission comes to an end in December. Some 800 Bundeswehr soliders will remain to train and advise the Afghan military.

Pakistan: How the 'audio leaks' scandal has discredited politicians 03.10.2022

Secret recordings of politicians have cast a negative light on the government and opposition parties amid worsening political turmoil in the South Asian country. Who is the ultimate beneficiary of these audio leaks?