Pakistan: Hardline Sunni groups on collision course with Shiites | Asia | An in-depth look at news from across the continent | DW | 14.09.2020 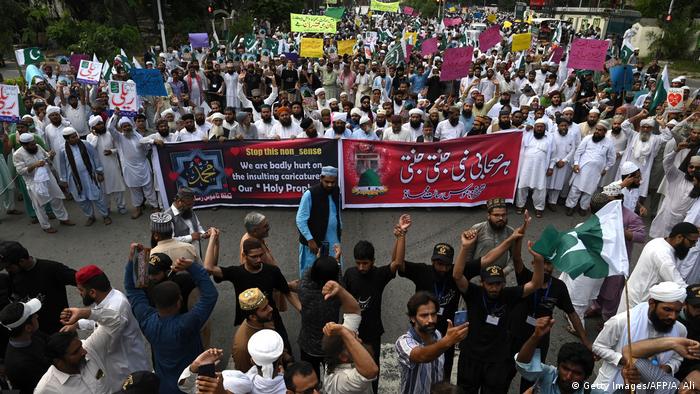 Pakistani police registered at least 40 blasphemy cases in August, according to the country's human rights groups.

The South Asian country's independent Human Rights Commission said most of these cases were filed against Shiite Muslims in relation to speeches made at religious processions.

On Friday, hardline Sunni groups organized a large-scale rally against Shiites in the country's financial hub, Karachi. Thousands of people participated in the demonstration and chanted anti-Shiite slogans, including "Shia kafir" (Shiites are infidel).

Although, the Sunni-Shiite conflict in Islam is centuries old, it intensified in Pakistan in the 1980s, after the 1979 Iranian revolution and the subsequent Saudi-Iranian rivalry.

Sunni groups accuse Shiites of "disrespecting" some of the Prophet Muhammad's companions, who they hold in high esteem.

In the past decade, pro-Saudi Sunni militant extremists have intensified their attacks on Shiites, who have a religious affiliation to Iran.

The rise in blasphemy accusations and street protests against Shiites has raised concern about a possible violent confrontation between the two groups.

"It is an unprecedented rise, and we are worried it can flare up sectarian violence," Mehdi Hasan, chairman of the Human Rights Commission of Pakistan (HRCP), told Dpa news agency last week

Rights groups criticize the government for not taking action against hardline sectarian outfits, some of which are banned in the country.

Asad Iqbal Butt, a senior official of the HRCP, says the authorities are not doing anything to rein in extremist groups.

"The situation is alarming not only for Shiites but also for the members of other minority groups. The government has turned a blind eye to sectarian organizations that are spreading hatred against Shiites and other religious minorities," Butt told DW.

In July, lawmakers of the provincial Punjab assembly passed a bill that imposed punishments for vilifying holy Sunni figures.

Shiite activist Rashid Rizvi told DW that most of the blasphemy cases against Shiites have been filed after the passage of the bill. "More than 40 cases have been registered in the month of August only and more people are being booked. One Shiite cleric fled the country due to death threats against him and some were arrested by police," Rizvi said.

Senator Akram Baloch is also of the view that the bill has led to a spike in blasphemy cases. "The Punjab government should immediately scrap the law because it is fueling sectarian tensions in the country. The law is being misused," Baloch told DW.

Sunni groups, however, say the law is necessary to protect Islam.

Hafiz Ihtesham Ahmed, an Islamabad-based Sunni cleric, alleges that members of the Shiite community regularly commit blasphemy. "The Punjab assembly bill has exposed Shiites who blaspheme against holy figures that are revered by Sunni Muslims. So, I think the cases [against them] are genuine, and the government should arrest all those who have been booked," Ahmed told DW.

Muhammad Jalal Uddin, a member of the Jamiat Ulema Islam, says his party would oppose any attempt to amend or repeal the Punjab assembly law. "We will go to any extreme to protect this law. Pakistan is an Islamic country and we should have Islamic laws," he told DW.

Blasphemy is a sensitive topic in the Islamic Republic of Pakistan, where 97 percent of its 180 million inhabitants are Muslims. According to Pew Research Center, adherents of Shiite Islam in Pakistan make up between 15-20% of the country's total population.

Pakistan's blasphemy laws have come under hefty criticism, as they have often been used to target minorities, activists, and to settle personal vendettas. Although no one has yet been executed under the laws, dozens of people are currently sitting on death row due to blasphemy convictions.

According to rights groups, around 1,549 blasphemy cases were registered in Pakistan between 1987 and 2017. More than 75 people have so far been killed extra-judicially after blasphemy allegations. Some of them were even targeted after being acquitted in blasphemy cases by courts.

In 2018, Asia Bibi, a Christian woman, was acquitted on appeal and left the country, provoking violent protests across Pakistan.

Peter Jacob, a rights activist, said he was concerned at the recent spike in blasphemy cases, which also involved other minority groups. "In recent weeks, three members of the minority Ahmaddiya community have been killed – one over alleged blasphemy and other for unknown reasons. Some Christians have also been booked in blaspheme cases. Now even Shiite Muslims are being targeted, with extremist groups openly spreading hatred against them," Jacob told DW.

Ishaq Khakwani, a former federal minister and member of the ruling Pakistan Tehreek-e-Insaf (PTI) party, admits that the situation is worrisome. "I am concerned over an increase in blasphemy cases. People are afraid of supporting the accused. Even if the person who is accused of blasphemy is released, his life continues to be in danger," he told DW.