A bus attack has killed scores in Pakistan's largest city, Karachi. Two Islamist terrorist groups have claimed responsibility for the attack on a Shiite minority group on their way to worship services. 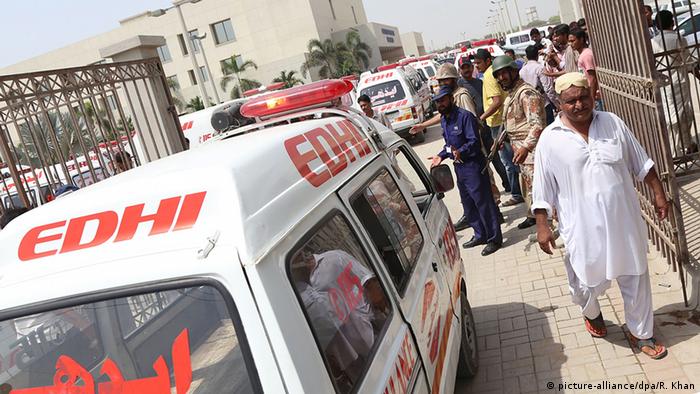 Attackers wielding pistols and machine guns stormed a bus in Karachi, Pakistan, on Wednesday, killing at least 43 people and injuring a dozen more belonging to the minority Ismaili Shiite religious group, the latest attack in a spate of sectarian violence that has rocked the country in recent months.

Officials could not immediately confirm who had carried out the attack, as two different Islamist extremist groups claimed responsibility for it. A Pakistani Taliban offshoot which calls itself Jundullah, or Army of God, called the press to say "infidels were the target" of the killings while a Pakistani affiliate of the "Islamic State" (IS) group made a similar announcement.

"Thanks be to Allah, 43 apostates were killed and around 30 were wounded in an attack carried out by 'Islamic State' soldiers on a bus transporting Shiite Ismaili infidels in the city of Karachi," read the statement on an IS-linked Twitter account.

Provincial police chief Ghulam Haider Jamali said that whoever was responsible, it was not an amateur attack: "These are the same people who have been doing terrorism before."

The bus was traveling through the outskirts of the city on the way to worship services for its Ismaili passengers when six gunmen boarded it, Jamali said. The attackers asked the Shiites on the bus to bow their heads before opening fire.

IS claims thousands of Pakistani supporters

The bus, riddled with bullet holes, was still able to make it to a hospital despite the driver being among the wounded, according to a security guard there.

Prime Minister Nawaz Sharif condemned the attack as an "attempt to create chaos" in a "very peaceful and patriotic community. "According to an intergovernmental memo obtained by The Associated Press, IS claims to have around 12,000 supporters in Pakistan, while the Pakistani Taliban has been leading an insurrection for more than decade in the hopes of unseating the government in Islamabad .

Wednesday's attack follows another anti-Shiite attack on January 30, in which a suicide bomber entered a mosque and killed 61 people including himself. About a month before that, Taliban militants killed 150 people, mostly children, at an army school in retaliation for military strikes against Taliban targets.

Pakistani officials not only knew about Osama bin Laden's location, they also kept him as a prisoner, according to a new exposé by US investigative journalist Seymour M. Hersh. DW examines his claims. (11.05.2015)