World Refugee Day: How a Pakistani risked everything to reach Europe | Asia | An in-depth look at news from across the continent | DW | 18.06.2021

World Refugee Day: How a Pakistani risked everything to reach Europe

Israr Ahmed Khan from Pakistan-administered Kashmir told DW about the terrible risks and hardships he faced while attempting to reach Europe with the help of human-trafficking agents. 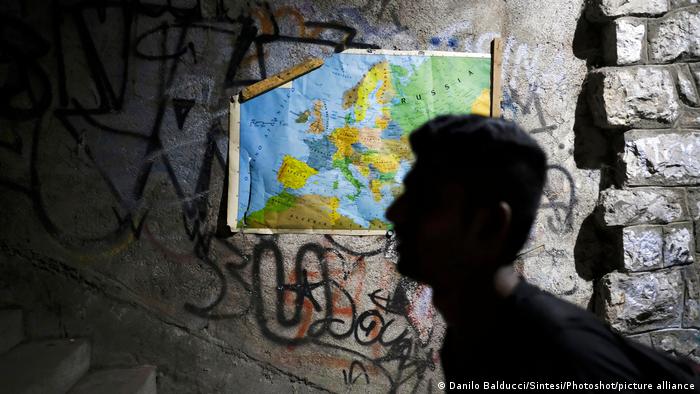 Israr Ahmed Khan, hailing from Pakistan-administered Kashmir, decided to leave the region in December 2012 after realizing that his life was under threat due to his political activities.

Khan had earned the ire of Pakistan's security agencies for demanding independence for the part of Kashmir that's under the control of Islamabad. He had also spoken out openly against jihadi and sectarian outfits, which, in his view, were instrumental in tearing down the social fabric of society in the region.

Khan contacted a few human-trafficking agents who promised to help him reach Europe. He then borrowed some money from his family and told them he was going to Rawalpindi, a city near the capital, Islamabad.

But the following day, Khan, along with a friend, ended up in the southern port city of Karachi. From there, he had to make an arduous journey to Pakistan's western Balochistan province, which borders Iran.

"In Karachi, policemen somehow learnt that I was going abroad," Khan told DW.

"A police vehicle stopped me and my friend and they asked for money. I had no option but to give them 5,000 rupees [€26.8/$31.8]. Then, from Lyari area of Karachi we boarded a bus destined for Balochistan."

Treated 'as if we were animals'

"I had a sigh of relief after the cops let me go," Khan said, adding that little did he know it was just the beginning of a long list of paying bribes to a number of officials on his way to Europe.

"I got into an overcrowded bus that took us to Balochistan's Gwadar city. From there, we reached the border area and entered Iran. But after traveling in Iran for some days, we were caught by Iranian authorities."

Khan said he and his friends were arrested near the port area in the southern city of Bandar Abbas.

Dozens of people were crammed into a small, filthy prison, he said, adding that the food they were given to eat was so stale that the very sight of it would make one vomit. "The Iranians brag about Muslim brotherhood but the way they treated us cannot be explained in words. They treated us as if we were animals," he said.

After spending 21 days in jail, they were deported from Iran to Pakistan. Even though they were relieved after returning to Pakistan, their troubles didn't end there.

"I was stunned when Pakistani officials started collecting valuables from the hapless migrants who had already been exhausted because of the arduous journey," Khan remembered.

"A Pakistani paramilitary official asked me to hand over my gold ring. I asked why, and he replied that it was a gift from me to them."

After Khan's friend managed to use his connections within the Pakistani government, they were returned to Pakistan-administered Kashmir.

Another attempt to make the journey

The bad experience, however, didn't deter Khan and his friend from trying again. They were determined to reach Europe despite the risks and hardships involved.

"This time we took the same route, greasing the palms of officials on our way to Iran, meeting agents there who took us to the Iran-Turkey border area."

When they approached the border, he said, they were fired upon by border guards but luckily remained unhurt.

"Iranian border security guards helped us enter Turkey. I was injured while scaling the fencing on borders. Some of my fellow migrants also got bruised. And immediately after entering Turkey, we were arrested by authorities there and sent back to Iran, from where we were deported to Pakistan," he said.

Khan said he encountered scary scenes on his way back to Pakistan, witnessing dead bodies of migrants abandoned in deserted areas.

After this experience, his friend gave up his plan to make it to Europe. "But I was determined to make a third attempt," he stressed.

"This time, our agents coordinated well with other agents in Turkey and Iran. We said we would only pay them once we made it to Greece. Iranian agents contacted their Turkish counterparts, helping us to reach the border with Turkey," he said.

In the border region, some people boarded the bus they were in and asked about the names of their agents. "They then took us to the basement of a house where I was horrified to see that migrants from Bangladesh, Pakistan, Afghanistan and other countries were chained. Then, I realized I had been abducted for ransom."

"The very sight of the place sent a shiver down my spine," Khan said, adding that the abductors were torturing the migrants, showing their torture marks and screams to their relatives on Skype and demanding ransom.

"I thought it was the last day of my life," he said pessimistically. "The kidnappers slapped me, telling me that they would deal with me later.

"But luckily the place was stormed by the Turkish police and intelligence agencies, rescuing us from the hell that we were in."

Khan said he felt "dejected" and "lost all hope," until he met a Pakistani from the town of Mandi Bahauddin, who put him in touch with an agent who promised to help him get to Greece.

"I finally made it to Greece in April 2013. I worked there for 18 months in an agriculture farm in terrible conditions, and later joined municipal bodies where I served for over two years before moving to Germany a few years ago. During all that time, I also visited different countries attending conferences on human rights," he said.

Now, at 41 years of age, Khan said he is happy to be in Germany.

"This country and the continent have given me a new life. The sense of freedom and human dignity that I feel here now, I never felt it before. I am working for a Turkish company and hope to contribute to the economy of Germany and the EU."