Pakistan is aiming to vaccinate 70% of its population by the end of this year, but conspiracy theories, myths and disinformation are impeding the mass inoculation drive. 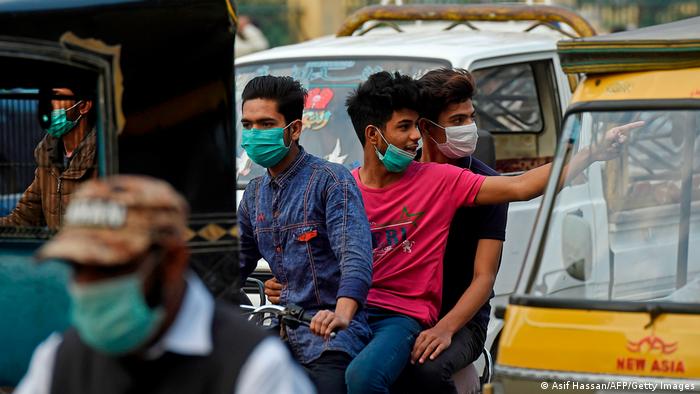 Experts urge the government to counter misinformation about COVID vaccines

The government hopes the COVID vaccine will be able to contain the spread of the coronavirus, but not everyone is willing to get a shot.

Conspiracy theories related to the vaccine abound in the Muslim-majority country. According to a report published by Gallup Pakistan, 49% of the population is reluctant to get vaccinated even if the vaccine is offered free of cost.

Experts say that misinformation and religious beliefs are responsible for people's mistrust of the vaccine.

Many people in the country believe the pandemic does not exist. Rumors are also rife that Western countries want to insert a "surveillance microchip" in the human body through vaccine shots.

Salman, who drives a cab in Karachi, told DW he doesn't trust the vaccine. The mass vaccination drive could be an attempt by global powers to spy on the world population, he said. He is also concerned about the vaccine's side-effects.

"Who knows what the vaccine can do to our bodies? It may even alter our DNA," the 30-year-old said of thedebunked claim.

Some Pakistanis say the vaccine is "haram" (forbidden in Islam) due to false claims it contains pig gelatin and human fetus tissues.

The main source of misinformation about COVID vaccines is WhatsApp, which is used by 39% of the country's population. Unsubstantiated claims about vaccines are also circulating on YouTube and Facebook.

Naila Tariq, a professor of pathology at Jinnah Postgraduate Medical Hospital in Karachi, says the misinformation on social media poses a challenge to health officials in educating people about the vaccines.

Pakistan so far has secured 17 million doses of the Oxford-AstraZeneca vaccine. The country has also approved China's Sinopharm and Russia's Sputnik V vaccines.

"Some people are skeptical of the Sinopharm vaccine because it is made in China. Some don't want the Oxford-AstraZeneca vaccine, as it is being manufactured in India," Tariq told DW.

Zoraiz Raiz, the founder of Corona Recovered Warriors, a group that coordinates plasma donations for COVID-19, said Pakistan's geopolitical relations also play an important role in the people's perception of the vaccines.

"Pakistan doesn't have good relations with most of its neighbors, especially India, whereas cultural differences with China play a role in disinformation campaigns," he told DW.

Noor Baig, who works at the Aga Khan University Hospital in Karachi, says that even educated people in the country believe in vaccine myths. "Everyone is exposed to media. When educated people search for information about COVID vaccines on the internet, they come across false studies and become misguided," he told DW.

The medical expert believes it is the responsibility of politicians and religious leaders to dispel myths about COVID vaccines and educate people about its safety and efficacy.

"If politicians and religious leaders spread misinformation about the vaccine on media and say it is a plot against humanity, people will hesitate to get vaccinated," Baig asserted.

Dr. Tariq urges the government to take steps to counter misinformation about COVID vaccines. Health experts also say that authorities should coordinate their awareness-raising efforts with the international community and the World Health Organization.