Pakistan has accelerated work on a number of hydropower projects in the Kashmir and Gilgit-Baltistan regions. But many locals oppose the projects and say they are being built on disputed territories. S Khan reports. 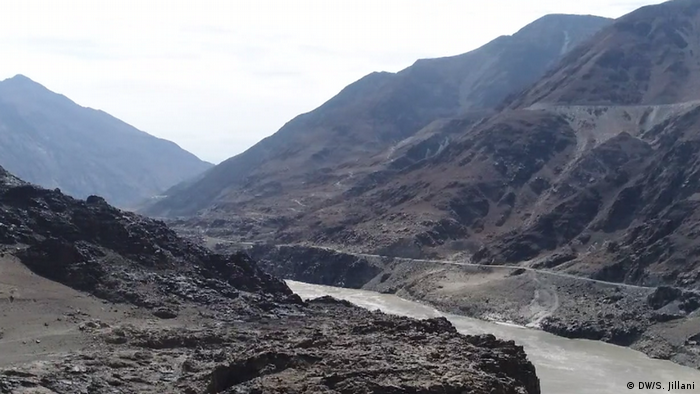 Prime Minister Imran Khan last week vowed to build the "biggest dam in Pakistan's history" after he inaugurated the construction of the Diamer-Bhasha Dam in the Gilgit-Baltistan region. He said the project will benefit the people living in the area. "The decision to build this dam was taken 50 years ago. There can be no better site for constructing a dam; it is a natural dam," the premier said.

The controversial dam is being built jointly by a Chinese state-run firm, China Power, and the Frontier Works Organization (FWO) of the Pakistani military, according to media reports.

A number of other hydropower projects are also underway in the area, with Kohala and Neelum Jhelum projects being the most contentious ones. The former is still under construction while the latter was completed more than a year ago.

Pakistan has been facing a power crunch for some years. In effect, there is significant electricity load shedding being implemented across the country in both urban and rural areas. The shortages have led to many factory closures and discouraged foreign investment in the country, resulting in lower employment, economic output and exports.

The public's growing dissatisfaction has triggered mass protests and destruction of public property time and again. Still, the problem is expected to worsen in the coming years as the mismatch between energy supply and demand in the country is projected to widen.

In 2015, Beijing announced the China-Pakistan Economic Corridor (CPEC), which is part of its intercontinental Belt and Road Initiative (BRI), with an aim to expand its influence in Pakistan and across Central and South Asia. CPEC includes plans to create road, rail and oil pipeline links to improve connectivity between China and the Middle East via Pakistan. As Pakistan is grappling with an acute economic crisis, experts say that CPEC has the potential to stimulate much-needed economic activity in the country.

Opposition parties, Gilgit-Baltistan and Kashmiri nationalists, and environmentalists have raised concerns about the construction of these big dams, saying the projects will destroy the environment and the livelihood of locals.

"Our worst fears have come true. The [Neelum] river has dried up at a number of points, forcing locals to migrate to other places. More than 800,000 people would be affected by these projects in the next 25 to 30 years. First India diverted around 21% of water from our region and now Pakistan is also taking away our water," Tauqeer Gilani, the head of Jammu and Kashmir Liberation Front in Pakistan-administered Kashmir, told DW.

"It is not only about environmental degradation. We must not forget that this region [Pakistan-administered Kashmir and Gilgit-Baltistan] is disputed, with a resolution pending with the United Nations. How can Pakistan allow China to build any project here?" Gilani said.

India's Ministry of External Affairs (MEA) slammed the construction work on the Diamer-Bhasha Dam when it was announced in May.

"Our position is consistent and clear that entire territory of the Union Territories of Jammu and Kashmir and Ladakh have been, are and will continue to be integral and inalienable part of India," MEA spokesperson Anurag Srivastava told reporters on May 14.

"We have consistently conveyed our protests and shared concerns with both Pakistan and China on all such projects in the Indian territories under Pakistan's illegal occupation," he said.

Environmentalists say the big dams in the region are damaging water sources, causing an acute shortage of water for locals.

"This [Neelum-Jehlum] project was built in haste. Authorities ignored all recommendations from Pakistan's Environmental Protection Agency (EPA) and the government did not bother to carry out an initial environment impact assessment by any credible international firm," Amjad Ali Khan, the spokesman for the River Protection Movement in Pakistan-administered Kashmir, told DW.

"The Kohala project will also disturb the ecosystem. We see heaps of garbage and sewage water in parts of the river that have dried up as a result of this project," Khan added.

According to some experts, the Neelum-Jhelum area is earthquake-prone, which makes it unsuitable to build dams. In 2005, a magnitude 7.6-earthquake shook the Kashmir region, killing around 87,351 people and displacing around three million.

Arif Mahmud, an environmentalist and former professor at Quaid-e-Azam Univeristy, Islamabad, says that some people are exaggerating the negative impacts of these projects. "In the past, people raised concerns about these dams' environmental consequences, but in many cases they turned out to be wrong. Pakistan disparately needs energy and dams are one of the cheapest and the best ways to acquire it," he said.

"They [projects] would create revenues and jobs. After the completion of these projects, their ownership would be transferred to the regional government. We believe that they will help Pakistan overcome power outages that have marred our economic growth," Shah underlined.

"The government is taking measures to mitigate the situation [possible negative impacts]. For instance, the required quantity of water is being released into Neelum River. The impact assessment of the Kohala project was carried out by an independent international firm, and we plan to conduct an impact assessment of the Neelum-Jehlum project also," he added.

Lieutenant General (retired) Asim Saleem Bajwa, the special assistant to the PM on information, also said the project will generate 4,500MW of energy and provide at least 16,000 jobs.