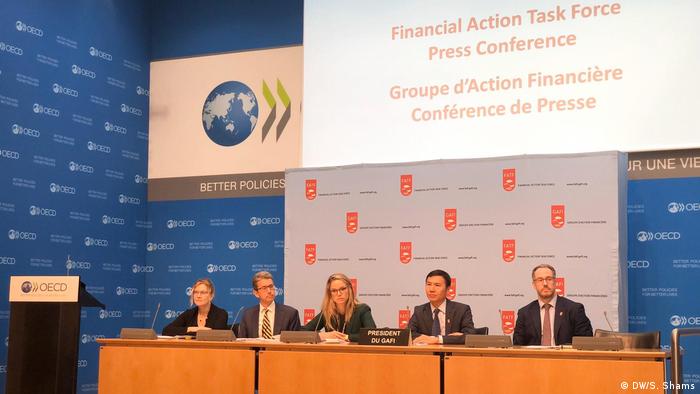 Pakistan has until February to improve its counter-terror financing operations in line with an internationally agreed plan or face actions against it, Xiangmin Liu, the chairman of the Paris-based Financial Action Task Force (FATF), an inter-governmental body established in 1989 to combat money laundering and terrorist financing, told a press conference on Friday.

"The FATF strongly urges Pakistan to swiftly complete its full action plan by February 2020," the body said in a statement. "Otherwise, should significant and sustainable progress not be made across the full range of its action plan by the next Plenary, the FATF will take action."

Pakistan, thus, remains in FATF's "gray list" until the completion of another review in February.

"While noting recent improvements, the FATF again expresses serious concerns with the overall lack of progress by Pakistan to address its TF [terror financing] risks, including remaining deficiencies in demonstrating a sufficient understanding of Pakistan's transnational TF risks, more broadly, Pakistan's failure to complete its action plan in line with the agreed timelines and in light of the TF risks emanating from the jurisdiction," FATF said.

The global watchdog put Pakistan on its "gray list" in June 2018, and gave Islamabad an October 2019 deadline to take action against home-grown militant Islamist groups and cut off their funding.

Being "blacklisted" by the 37-nation bloc could have serious implications for Pakistan's already fragile economy, as possible sanctions would not allow the country from seeking the financial loans it needs on a regular basis.

FATF's Friday decision to keep the South Asian country on its "gray list" until February shows that the body believes that Pakistan's financial system continues to pose a risk to the international financial system because of "strategic deficiencies" in its ability to prevent terror financing and money laundering.

Has Pakistan gone after terrorists?

"We have explicitly told all the participants of the APG (FATF's Asia-Pacific Group on Money Laundering) that Pakistan is working exactly per the requirements of FATF and would accomplish them soon," said Azhar, who was part of the Pakistani delegation at the most recent FATF review in Paris.

Sources in Paris say Pakistan has completely or partly compiled with most of the 40 FATF demands, albeit some of them need more work.

Prime Minister Imran Khan's government did take some steps to allay the concerns of the international community. The authorities detained Hafiz Saeed, the alleged mastermind of the 2008 Mumbai terror attacks, and arrested four top officials of Saeed's Lashkar-e-Taiba group on charges of terrorism financing.

Alice Wells, head of the US State Department's South and Central Asian Bureau, welcomed the measures, saying that "Pakistan, for its own future, must prevent militant groups from operating on its soil."

India, however, is still unsatisfied with Pakistan's counterterrorism measures, alleging they're an eyewash and demanding FATF to blacklist the country.

"Islamabad has no other option but to act against militants. The international community is demanding Pakistan's security establishment to put things in order," Khalid Hameed Farooqi, a Brussels-based senior Pakistani journalist and diplomatic affairs analyst, told DW.

He added that former PM Nawaz Sharif's government had taken several legislative actions to rein in Islamists, but the country's powerful military continued to back some proxy jihadist groups.

"In 2017, the Pakistani government sent several top diplomats to Washington, Paris and Brussels, to highlight Indian atrocities in Kashmir. But the officials in these Western capitals clearly told them to act against Hafiz Saeed first," said Farooqi, underlining the importance of Saeed's arrest in avoiding the FATF black list.

But Amjad Shoaib, a retired military official and defense analyst, says that FATF is "an instrument in the hands of big powers."

"India and the US have ganged up against Pakistan. We should not be blackmailed. There is no evidence against Hafiz Saeed. Still we arrested him. These are all pressure tactics," Shoaib stressed.

Security analysts say that Pakistani authorities are only focused on avoiding FATF's "black list" instead of tackling the issue on a long-term basis. They say the country's longstanding security policies regarding India and Afghanistan have remained intact.

Islamabad's ties with New Delhi and Kabul have only deteriorated in the past few years, with Afghan and Indian authorities accusing Pakistan of aiding militant groups.

Tensions between India and Pakistan have increased manifold this year due to an escalating Kashmir conflict. On the other hand, Pakistan's efforts to broker a peace deal between the US and the Afghan Taliban have so far not yielded results.

"FATF is pressuring Pakistan so that it can bring the Taliban to a peace settlement. The 'black list' threat is being used to force Pakistan to serve American interests," said Shoaib.

But Usman Kakar, a Pakistani senator, says shifting blame on others won't help Pakistan. "It is unfortunate that Pakistan is still distinguishing between good and bad militants. We have not taken any concrete action against terrorist organizations," he said.

"But I think Pakistan is still not going to be blacklisted by FATF because Washington needs Islamabad right now. I think the FATF will give more time to Pakistan," said Kakar.

"But in the meantime, we must crack down on all extremist and terrorist outfits because it is in our own interest," he added.

Has China-Pakistan Economic Corridor lived up to the hype?

The China-Pakistan Economic Corridor has been touted as a "game changer" for Pakistan's economy. Four years since launching, its implementation faces serious challenges, and the future course remains uncertain. (30.09.2019)

In his speech to the UN, Pakistani PM Imran Khan has warned of a "bloodbath" in Kashmir and warned that war was possible over India's actions in the region. (27.09.2019)

Afghan women demanding their rights have been driven underground by Taliban threats and beatings. But they haven't given up. And, in the lead-up to the 75th Independence Day celebrations of both India and Pakistan, we speak to witnesses who experienced the trauma and promise of the birth of two new nations.