Pace of Rohingya repatriation depends on Myanmar, says Bangladeshi official | Asia| An in-depth look at news from across the continent | DW | 24.08.2018

It's been a year since violence in Myanmar's Rakhine state triggered a massive exodus of Rohingya people fleeing to neighboring Bangladesh. DW spoke to Bangladesh's refugee and repatriation commissioner about the crisis. 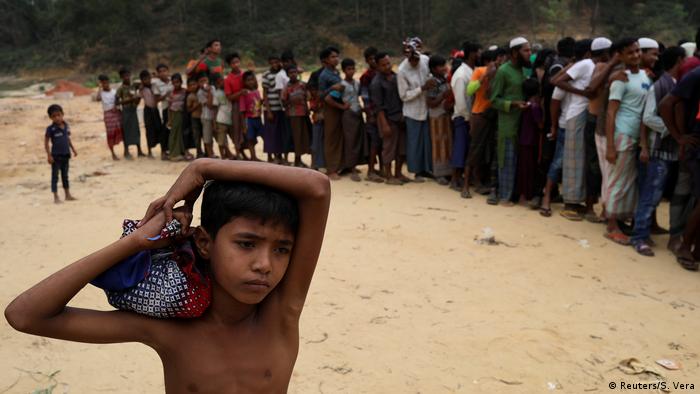 With a repatriation plan in tatters and funding evaporating for a million refugees with ever-growing needs, Rohingya Muslims who fled Myanmar to Bangladesh face a grim future one year after the latest eruption of a decades-old conflict.

Raids by Rohingya militants on August 25 last year across Myanmar's Rakhine state spurred an army crackdown, which the United Nations has likened to "ethnic cleansing."

Around 700,000 of the Muslim minority fled by foot or boat to Bangladesh, in an exodus unprecedented in speed and scale.

The crisis has heaped enormous pressure on Bangladesh's impoverished Cox's Bazar district, which already hosted around 300,000 of the stateless group.

Myanmar says it is ready to take those who fled back. But it refuses to recognize the Rohingya as citizens, labelling them instead as "Bengali" illegal immigrants.

A deal between Myanmar and Bangladesh to start sending them back has also gone nowhere, caught up in bureaucracy and mistrust, with fewer than 200 having been repatriated so far.

In a DW interview, Bangladesh's refugee, relief and repatriation commissioner, Abul Kalam, explains about the process of repatriation and the obstacles to it.

DW: How does the Rohingya repatriation deal struck by Myanmar and Bangladesh work? Can you explain the process?

Abul Kalam: This process can be divided into three stages: The first stage is to develop a framework; the second stage is infrastructural development; and the third is to start field-level work which means starting physical repatriation.

Both governments have signed a memorandum, followed by the formation of a joint working group. This committee as well as high-level representatives from both sides have met several times to discuss the modalities of Rohingya repatriation.

In which stage is this process now?

It is in the second phase. Myanmar has not been able to finish reconstructing the villages and homes for the Rohingya people. But they have already set up two reception centers and one transit camp.

From our side, we have established a repatriation center which is ready for use. Construction of one more will be finished within a month. Three more centers are in the pipeline. So from our side, we are ready to start repatriation. But we are waiting for them to be ready.

But Myanmar's authorities say the ball is in Bangladesh's court when it comes to speeding up the process, and that they are there to receive the Rohingya. What is your take on this?

Of course, receiving the repatriated Rohingya is their part of the job. But the issues here concern their handling of the repatriated people: What will Myanmar authorities do with them? Where will they take them?

The memorandum both countries signed clearly states that these people have to be repatriated to their respective villages or nearby places where they wish to stay. These places are yet to be reconstructed. Moreover, the repatriation has to be voluntary and safe. These issues have not been solved yet.

What do you mean by safe and voluntary repatriation?

Bangladesh and Myanmar have agreed upon this voluntary repatriation. We cannot send back anyone by force. We have given the Rohingyas shelter and chance to save their lives. So when they will feel that their safety is ensured, then they will return. They need a place to live. They need opportunity of work and earn their livelihood. They need the freedom to move around the country. They need the liberty to own their assets. These have to be secured by Myanmar. They have to create these opportunities. It is clearly written in the agreement.

You said Myanmar has already set up reception centers and a transit camp. From when do you expect the Rohingya to be relocated to these centers?

Yes, we have visited these centers. But the Rohingya people are still in camps in Bangladesh. They don't want to be repatriated to another camp. They want their homes. We regularly interact with these people. They have their demands. They want citizenship. They want their ethnicity to be recognized. These demands might take a long time to be fulfilled. But at least if they can be assured about their basic rights, they might be persuaded to start moving back to their land.

What is the United Nations' role in this repatriation process?

The UN will ensure the voluntariness of repatriation. Agencies like the UNHCR and UNDP have already been involved in Myanmar.  But they might also need free and full access to the Rakhine state.

What problems have you encountered with regard to registering the Rohingya people in Bangladesh?

At the beginning of the crisis, our passport department registered around 1.1 million Rohingya individuals. But later we wanted to register them by their families which we thought would be important for repatriation. So far we have registered 13,000 of them. We have already sent a list of 8,000 families to Myanmar. But they have expressed reservations about 3,500 of them.

What kind of reservations?

They suspect some of them of having links to terrorism. In some other cases, they expressed doubts regarding the people's identity.

How will you solve these problems?

Well, it is a matter for bilateral talks. Our foreign ministry officials will continue discussions with their Myanmar counterparts. The authorities there also have to substantiate their claims.

Against this backdrop, when do you expect repatriation to actually begin?

It actually depends on Myanmar. If the authorities there can finish their job, we are ready to start the repatriation anytime.

The interview was conducted by Zobaer Ahmed.

A year since Myanmar began a campaign against the Rohingya, a study has shown many kids thought to have been separated from their parents are now orphans. Some 700,000 people have fled violence in Rakhine State. (23.08.2018)