The suspension of Egyptian satirist Bassem Youssef's television show has triggered messages of support from around the world. His repertoire had been popular with critics of the Egyptian government. 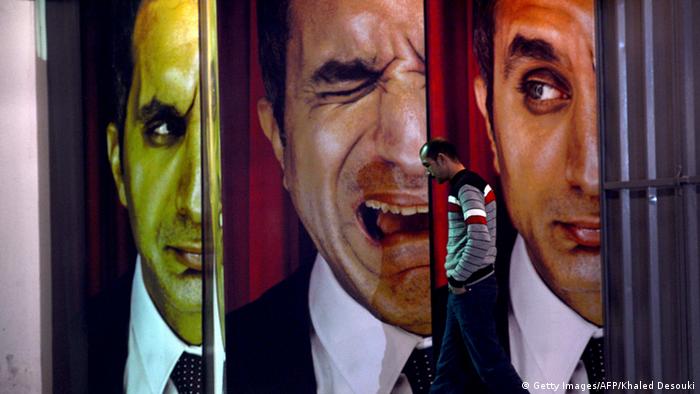 Solidarity and shock have been the most common public reactions following the cancelation of AlBernameg - the popular show hosted by Egyptian satirist Bassem Youssef.

"We understand why he is taking such a decision - we understand the pressure that was applied on him and his producers," said Ayman Abdel Meguid from the April 6 Youth Movement activist group. "We stand in solidarity with him and we would have liked for him to continue with his program; however, we totally understand and respect the decision."

This, he added, can be expected from leaders of such a regime, "and we can only look and laugh at how fragile they are and how they are afraid of freedom of speech."

"Although the Egyptian people sent a very strong message during the elections that they are not interested in the elections, I think this is one more wakeup call," he said.

Dutch politician and member of the European Parliament Marietje Schaake said the show's cancelation was a bad omen for freedom of speech and opinion.

On Twitter, various people expressed their solidarity. "There is something rotten in the world of the Arabs," tweeted Hisham Melhem, head of the Al Arabiya office in Washington. Meanwhile, radio journalist Ban Barkawi wrote, "When Egypt began to worship Sisi as a god I lost almost all hope in the Arab world. The end of Bassem Youssef sealed the deal."

A blow to freedom of speech

"This is a bad sign for freedom of expression in Egypt," commented DW Director General Peter Limbourg. DW secured rebroadcasting rights for Youssef's program at the beginning of the year.

"Bassem Youssef displayed great courage with his fearless reports on political and societal developments in Egypt," said Limbourg. "We perfectly understand that, in view of what was obviously overwhelming intimidation, he has decided not to continue with his program."

He added that DW would continue to support Youssef in the name of freedom of expression and of the press. "I am delighted that we will have him as our guest at the DW Global Media Forum in Bonn from June 30 to July 2," Limbourg said.

On Monday (02.06.2014) Bassem Youssef announced the cancelation of AlBernameg, which was aired by the Saudi-funded MBC network, at a press conference in Cairo. The exact reasons for the move were not clear even after the conference. Youssef vaguely referred to "powers" that had led to the show's suspension. The decision was premeditated, he said, noting that it was already made before the show's production 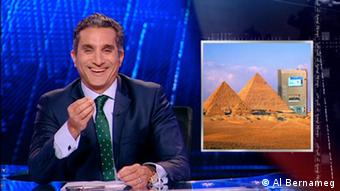 Youssef entertained viewers all around Egypt with his satirical humor

"When the show's script only appeared on paper, nothing was being done yet," said Youssef. "This means the reason is not the content of this one episode, but the show as a whole. In its present form, AlBernameg may not be aired on any Egyptian or Arab channel."

Youssef indicated that his decision had been influenced by several factors. "The pressure was too much for one single person," he explained. "I was worried about my safety and that of my family."

He rejected offers to have his program aired on foreign channels. "We got many offers from American and European broadcasters, but this would only increase the mistrust," Youssef said. "If AlBernameg was aired outside of Egypt, it would lose its credibility. And people would then say that it's (been manipulated) by foreign agents."

Bassem Youssef's TV career had a modest start. A table, a chair and a camera - that was all the equipment he had when he started presenting his opinions on YouTube shortly after the start of the Egyptian revolution. His clips attracted so many fans that he was soon propelled into television stardom. His show first aired in November 2012 on private Egyptian channel CBC. Millions watched as he dished out his criticism of various Egyptian personalities, especially those in power.

His statements were so strong that CBC dropped the show in November 2013. In February of this year MBC took over the broadcasts. From mid-February, AlBernameg was aired by DW's Arabic television channel across the whole Arab-speaking region.