Bassem Youssef makes a TV comeback | World | Breaking news and perspectives from around the globe | DW | 15.02.2014

Egypt's most famous satirist is returning to the airwaves via DW television. He continues to joke about the political situation in his country, putting himself in danger of legal prosecution.

His opening words are enough to elicit a hearty laughter from the audience. With a mock-serious expression, his left eyebrow slightly raised, Bassem Youssef announces to the camera, "The show was not canceled! Freedom of opinion still exists in Egypt!" A cheer erupts among the people gathered inside Radio Theater in downtown Cairo, where Youssef's show is filmed. And a few kilometers away, viewers gathered in front of the TV at Cafe Peros chuckle loudly at the same time.

Youssef's show "AlBernameg" is broadcast in Egyptian cafes in a similar fashion to soccer matches. Patrons drink tea and smoke waterpipes while watching what is probably the best-known satirical series in the Arab world - just like here at Cafe Peros in Cairo's Masr el-Gedida district.

Youssef's jokes seem to resonate with Egyptians, known for a having a good sense of humor, but some of the laughs come with a bad aftertaste. No other person is currently attracting as much media controversy in Egypt as Youssef. He picks on those in power, criticizes the personality cult surrounding Egyptian military chief Field Marshal Abdel-Fattah el-Sissi, pushes boundaries and breaks taboos.

"I don't like his sexual innuendos," says one of the customers at Cafe Peros - but he still laughs at the jokes. "We are a conservative society," adds another. However, yet another visitor says, "Bassem Youssef's humor represents the ordinary Egyptians that you see on the street every day." The others at the table nod affirmatively. "Everyone is criticizing his sexual references, but we Egyptians make such references everywhere and all the time," he says. 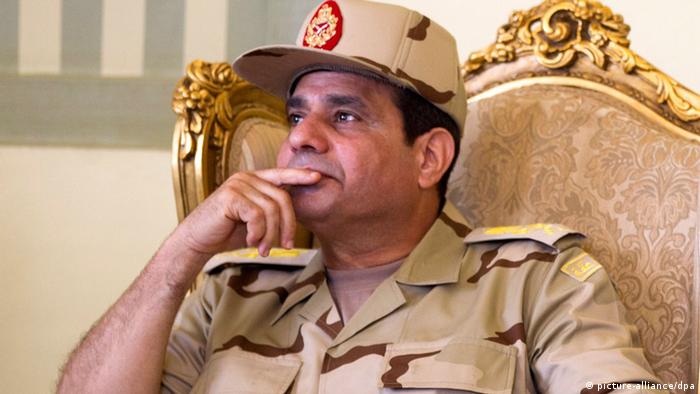 But Youssef has been joking about bakeries selling cakes, cookies and chocolate with el-Sisi's image imprinted on them. As a result, Egyptian broadcaster CBC canceled Youssef's contract, refusing to air the episode in question. According to CBC, conditions of the contract were breached, but nobody knows the exact reasons for the decision - not even Youssef, as he admitted in the last episode of his show.

After six months off the air, "AlBernameg" is being broadcast again by Egypt's MBC channel and Deutsche Welle. But another pause cannot be ruled out: after just one "AlBernameg" broadcast this year, there is already a lawsuit against Youssef - for allegedly insulting national symbols.

In the meantime, Youssef continues seemingly unfazed. He is joking about el-Sisi's possible candidacy in the next presidential elections, although in a more subtle way than a year ago.

"No one knows if el-Sisi will run for president or not," Youssef said in the last episode. "This is why we have prepared two manuscripts," he continued, pointing to a thick stack of paper on his desk. "This is the manuscript if el-Sisi doesn't run. Then it's all about the other candidates." 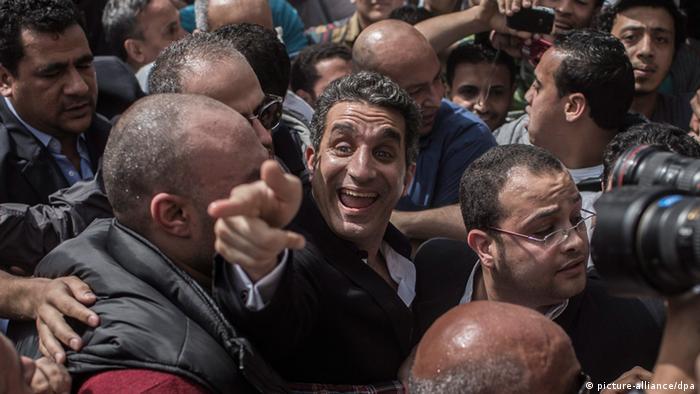 Youssef is popular but at risk of prosecution in Egypt

He waited until the audience finished clapping and held up a small, blank piece of paper. "And this here is for the possibility that el-Sisi does run in the election," he said quietly, implying that criticizing el-Sisi in this situation would be dangerous.

This joke seems to hit home with the audience at Cafe Peros. Laughter erupts. One of the visitors comments, "The jokes about the Muslim Brotherhood were more ruthless a year ago. We accepted them because we wanted to get rid of the Muslim Brotherhood." He pauses and takes a drag on his waterpipe, his smile fading. "But the military is a red line here in Egypt - Youssef should not cross it."

Youssef also shows clips from other shows on Egyptian television that ridicule possible presidential candidates other than el-Sisi. "Egypt needs a strong man - a man with charisma," says one TV show host and asks, "And if we have two candidates, then we'll be standing between two chairs - how's that supposed to work?" Youssef looks into the camera with a dumbfounded expression and shouts, "Yeah! How can we choose between two candidates? Would that be democracy?"

The audience claps again and laughs. Youssef pauses for a few moments and casts a serious glance at the camera, "Yes. That would be democracy." Not everyone is laughing this time.