It's almost like Shakespeare: Brexit or no Brexit? That was the question. After the latest vote in Parliament, everything is still on the table. The prime minister's plans are a shambles, says DW's Bernd Riegert. 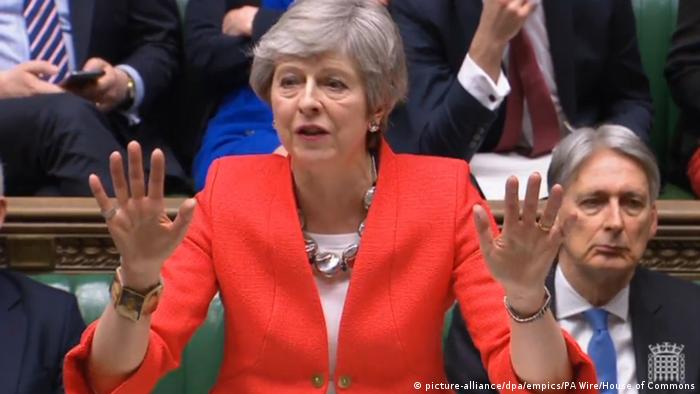 The debate in the British Parliament was passionate and long. It was pure political entertainment, but with the same outcome as in January. Parliament again rejected the Brexit agreement with the European Union. Seventeen days before the United Kingdom's exit from the bloc, the country is about to tumble into the economic and political unknown. Brexit proponents and opponents alike voted against the agreement, which UK Prime Minister Theresa May and the EU had reworked at the final minute, with different arguments.

The voters, political parties, Parliament and the government are all split. Britain is in crisis. There is even talk of a dissolution of the UK — of the union between Scotland, Wales, England and Northern Ireland — as a consequence of the Brexit fallout.

The EU was not in a position to offer the UK a viable alternative. Brussels is partly to blame for that. A no-deal Brexit is bad for the EU, as well as for the UK. It would mean that the bloc's second-biggest economy would suddenly become a domestic market. The EU and UK are hurtling toward a trap of their own making. Observers outside Europe can only shake their heads and ask: How does this happen? Or, for nationalists and isolationists like the United States president, take pleasure as the EU grows weaker.

The dream of Brexiteers — that the UK would free itself from the supposed shackles of the EU and return to its imperial greatness — is likely to soon be shattered. In a globalized world, a country like the UK cannot just go it alone, even if it is a nuclear power with a seat on the UN Security Council.

Time to end the madness

Seventeen days remain to avert the worst-case scenario. On Wednesday and Thursday, Parliament will vote on whether to proceed with a no-deal Brexit, or stop this madness and extend the negotiating phase for at least a few weeks. The best way out of this impasse, however, would require great courage from the thus far stubborn prime minister. May should revoke Article 50 (the legal and political process of withdrawing from the EU) and resign herself. A new head of government could then make a fresh start, whenever the British make clear exactly what it is they want. The economic damages could be avoided and May could cement a place in the history books, though not for the reasons she thought. The prime minister hinted at this potential course of action for the first time in Parliament. She realized that she failed. She couldn't deliver.

More likely, however, is that May pushes on and attempts to extend the negotiating phase with the EU, though she has limited herself because the EU needs a good reason to do so. You cannot just extend the current drama. There is also the possibility of a second Brexit referendum, but what exactly would be the question asked?

The EU would likely end up agreeing to an extension, because nobody in Brussels wants to be blamed for pulling the plug and somehow taking the blame for the chaos in the UK. Shakespeare would take pleasure in all this confusion.

The Day with Brent Goff: Another Brexit Blow

EU defense ambitions should not 'duplicate' NATO: Stoltenberg 2h ago

Opinion: No far-right publishers at the Frankfurt Book Fair, please! 8h ago