Opinion: The World Cup in Russia - no Putin Games

The World Cup, which is now coming to an end, has offered surprises in many ways. The greatest and most beautiful was the cheerful atmosphere in Russia's cities, says Juri Rescheto. 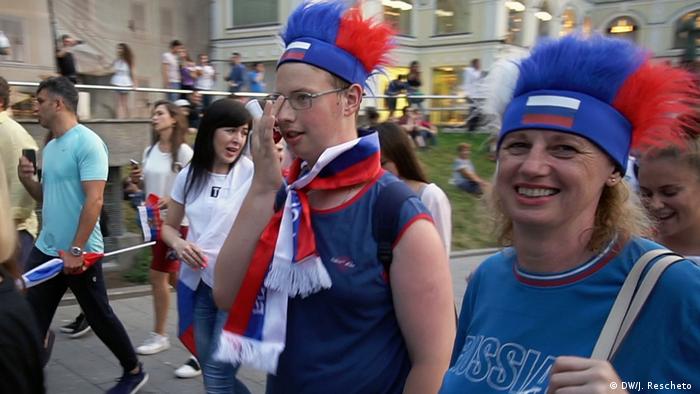 Has this World Cup changed Russia? Yes. Permanently? I don't think so. But, for at least a month, the tournament made the country colorful instead of gray, cheerful instead of grim, courageous instead of fearful. Both for the outside world and for the people who live here.

Even if I saw the gray of the Russian police among the many colors of the fans in the last few days, for once, I did not immediately think about restrictions on the freedom of expression. Rather, I thought of Russia successfully mastering the security at the biggest sports event ever in the country.

This success was mainly due to the unique mixture of safety and exuberance that made Moscow and the other World Cup venues truly European cities. It was not the nationwide Wi-Fi coverage, nor the live broadcast of games on the subway, nor the Russian railway's free fan trains or the high-tech bus stops where you could charge your mobile phone. Everyone was able to benefit from this.

But there was something completely different that was much more important - the feeling that you could be whatever you wanted to be.

Being able to shout "Goal!" on the patio of a pub or spontaneously embracing strangers, for joy or comfort. Dancing, singing and, yes, drinking alcohol on the sidewalk without having to wrap the bottle in newspaper. Flirting with Brazilians, despite the warnings from moralists in the Duma. Drinking to world peace with Mexicans in a dacha and then chugging back into town on a tractor with a hangover.

Scratching together the last bits of English learned in school to explain to an irritated fan from Saudi Arabia that Novgorod, where he had just landed, is not Nizhny Novgorod, where he should have landed to see his team's game. To help this fan change his ticket, push a jar of home-made gherkins into his hands and wish him a good trip to the right Novgorod – these were things that were part of this World Cup, which belonged above all to the people and not to the state.

The people - tens of thousands of volunteers, hundreds of thousands of foreign guests and millions of Russian football fans. For them it was a World Cup of safe cities, modern stadiums, fantastic weather, delicious beer and - most importantly - the sensationally good Russian team, which no one previously would have expected to reach the quarter-finals. The latter has, of course, contributed significantly to the atmosphere in the country.

Football has given hope

And, it was not Vladimir Putin's World Cup, or even the Putin Games, as the tournament was often called beforehand. Even though President Putin, as head of state, bore overall responsibility for the organization, he could not order his compatriots and fans to be so cheerful, hospitable and kind-hearted.

It is true, of course, that Putin - politically isolated and sanctioned in the West - benefited internationally from the tournament's success. But it wasn't just him. And the Russian president certainly does not need the World Cup to legitimize his own country's system.

Despite all the euphoria, this World Cup will not make the lives of the Russians any easier in the long run. Neither politically nor economically. On the contrary, before and during the World Cup, the government passed several laws that make everyday life more difficult.

But football has given hope. Hope that one day this country will no longer be associated only with Skripal, the Donbass and sanctions. Hope that shortly after the final there won't be anything like the dramatic events seen after the Olympic Games in Sochi in 2014, when Russia suddenly took over Crimea.

That Russian theatre director Kirill Serebrennikov, who is under house arrest, will not be put in prison and that Ukrainian director Oleg Senzow, who is in a Russian prison camp, will still be exchanged for Russian prisoners in Ukraine. Hope that Russia, which presented its smiling face to the world, will not suddenly show its teeth again.

Has the World Cup changed Russia?

Four weeks of football mania, street parties and exceptionally friendly police: Many Russians don't want the World Cup to end. So will any of the changes in the country's host cities stick? (13.07.2018)

Russia asks its citizens to pay up for the World Cup

Higher taxes, lower pensions: Russian citizens are paying for the privilege of hosting the World Cup with harsh cuts to social benefits. A major financial hangover is set to follow the world's biggest sporting event. (11.07.2018)

Domagoj Vida has apologized for a video posted on social media in which he said "glory to Ukraine" after Croatia's win over Russia. Tensions between Russia and Ukraine have been high since Russia annexed Crimea in 2014. (12.07.2018)

India evacuates over 200,000 people as Cyclone Tauktae hits 7h ago