Opinion: The US sends a warning to Assad and Putin

The US missile attack on Syria's Shayrat air base was risky. But DW's Kersten Knipp says it may also bring hope, as Assad and Putin could realize they can no longer do whatever they want in the war-torn country. 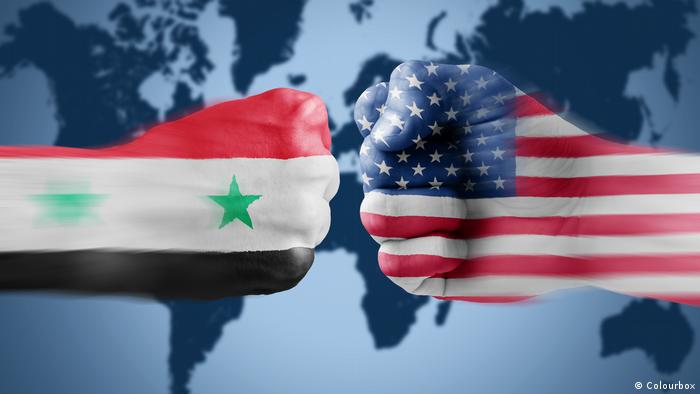 So far there has been no follow-up attack. What will Trump's next move in Syria be? No one knows. The Twitter-happy US president has been conspicuously reserved of late. Perhaps that is part of his calculus. But maybe he just doesn't know what to tell his generals.

For this US military engagement in Syria was very risky: Russia has already deployed the warship Admiral Grigorovich to the Mediterranean. One thing is unmistakable, though: The US missile attack was a warning shot. Bashar al-Assad's regime, but above all the Kremlin, has certainly gotten the message that the USA is once again part of the equation in Syria.

Since Barack Obama failed to act after Damascus crossed his "red line" by using chemical weapons in 2013, Vladimir Putin has felt free to do as he pleased in Syria. In order to sell the idea of Russia as a re-emerging global military and political force, he has stood by a leader who has killed anyone getting in his way. And Assad has had no scruples about justifying his use of force by claiming to be fighting terrorism. In his name - and on his orders - thousands of innocent people have been killed by barrel bombs, artillery fire, guided missiles and now, apparently, chemical weapons.

Read more about Russia's reaction to the attack

It cannot be denied that thousands of maladjusted killers are committing heinous acts of violence in the name of Islam in Syria and the rest of the region. They are even doing so in Europe. What such killers are capable of was also on display last week in Stockholm. Nevertheless, it is utterly cynical that the mass killing being carried out by the Assad regime is being sold as taking place under the banner of fighting terror.

The fight against terror groups is absolutely necessary; it even demands military action. But Assad and Putin are not limiting themselves to fighting jihadis alone. They refuse to differentiate between terrorists and normal opposition forces - and that is the point at which the fight against terrorism becomes sheer cynicism. Furthermore, to use it as justification for what is happening in Syria is an insidious and disingenuous argument. For what can one possibly have against fighting terrorism?

Perhaps only this: The unethical boundlessness of this fight springs from the cold calculation of the Assad regime. Assad knew exactly what he was doing when he freed the worst jihadis from Syrian prisons at the time riots began taking place in his country. Sponsored by wealthy people who made their fortunes with petrodollars, it was these criminals that gave the rebellion the ugly face that it still bears today. Assad's strategy is simple: He is presenting himself as the man fighting the genie that he himself let out of the bottle. And with that he attempts to justify his own political legitimacy. He cannot be allowed to get away with it.

The aim: Numbing people to violence and massacre

It is also quite possible - as many Arab commentators have suggested - that these heinous attacks have another purpose: to systematically condition the world so that people come to accept violence and massacre as normal everyday occurrences. Again, the logic is simple: Once that premise is accepted, butchers around the world can brutally murder their citizenry, unimpeded. Seen this way, Syria might be thought of as the stage for the ritual slaughters of the future.

Is Trump escalating the Syrian conflict? Perhaps. A little, in any case. But the fundamental drivers of violence in this war are to be found in Moscow and Damascus. It is therefore good that Trump - for whatever reason - has sent a signal to Syria. One can only hope that it will make an impression, also because of the refugee crisis: No one can live in a war zone.

Here is a bold hope: Perhaps all this occurred to Donald Trump as well - but it was just more than he could fit into a tweet.

US missile strike on Syria 'carries message for North Korea and China': analysts

President Trump ordered the strike after Syrian forces apparently attacked civilians with a nerve gas. Some analysts say he wanted to send a message to North Korea, but it remains unclear what message it will receive. (08.04.2017)

Russia: US airstrikes on Syria illegal

Russia's envoy to the UN has accused the US of violating international law by carrying out airstrikes on Syria. US envoy Nikki Haley said the strikes were justified and threatened further action. (07.04.2017)

Sudan: Internet access disrupted ahead of Khartoum protests 1h ago