Can the head of Germany’s domestic intelligence service remain in office? The decision has been postponed – an indication that this government doesn’t dare do anything anymore, says Jens Thurau. 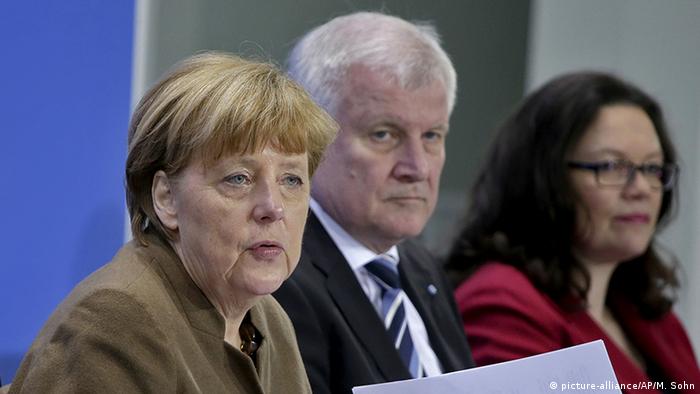 An atmosphere of doom hung over the government district again on Thursday. The head of Germany's domestic intelligence service had openly and repeatedly contradicted Chancellor Angela Merkel. The subject was, of course, immigration policy – what else?

To put it simply, the division of roles is as follows: Hans-Georg Maassen, the president of the Federal Office for the Protection of the Constitution, believes that law and order are under threat – less from right-wing extremists and Nazis, and more from unregulated immigration. His boss, Interior Minister Horst Seehofer of the Christian Social Union (CSU), takes the same view. The chancellor does not. Nor does the Social Democratic Party (SPD), Merkel's junior coalition partner, which spent the whole day vehemently calling for Maassen's dismissal. A crisis meeting in the chancellery followed; then the issue was postponed – until Tuesday.

Question one: What's going to be any different in four days' time? Maassen, a conservative, has spent his whole life fighting for what he understands to be law and order – most recently by very undiplomatic means. The governing parties obviously hope he will give up before Tuesday and resign, thereby rescuing the government, which is not very likely.

Question two: Is it really still about this one personnel issue? Isn't it far more about the heart of this government? The fact that it cannot agree a common approach to the key issue of asylum policy? It's not always clear who stands where, but it's very apparent that they can't work together.

Both the CSU and large parts of Merkel's CDU party want to take a hard line towards foreigners. They believe this is the only way they'll be able to keep the right-wing populists at bay. Merkel just wants to carry on governing. The SPD would like to put an end to this misery sooner rather than later, but can't, because all the opinion polls indicate that another election would be an even bigger disaster for their party.

This all smacks of panic, of a government that's going nowhere really fast. And it's only going to get worse. Elections for state parliaments in Bavaria and Hesse are coming up. More punishment for the established parties is to be expected, especially for the governing parties of the CDU, CSU and SPD. The populist AfD is gaining ground. Next year, elections will be held in several eastern German states, where some opinion polls say the AfD has already overtaken the CDU.

During this week's Bundestag debates there were brief flashes of hope from time to time, which did seem to indicate there is a way out of the situation: When courageous speakers called out the xenophobia of the AfD's right-wing populists and demonstrated that they were cozying up to right-wing extremists and Nazis. When, in doing so, the parties showed they were capable of overcoming their differences, and when the democratic elements in parliament came together to resolutely defend the constitutional state and the separation of powers.

These forces, in all the parties including the Left party, must now be prepared to speak the same language on this issue. They must also be prepared to govern together – in order to do something about the housing shortage, sort out the care system, bring the country up to speed digitally. Solve the real problems, in other words. And, yes, do talk to people about their fears about immigration. But only if they refrain from walking alongside those who do the Nazi salute or attack Jewish restaurants.

Yes, that could work. Right now, though, it doesn't seem likely. Which means that, come Tuesday, the atmosphere of doom will descend on Berlin's government district once more. Or violence and counter-violence will break out again somewhere in Germany, and there'll be another city's name to add to the list, below Chemnitz and Köthen.

Or, alternatively, Germany could pull itself together. It could show it's a society that makes clear it won't allow itself to be pushed around by xenophobic right-wing extremists and haters of democracy. Where all the political parties recall and focus on the core values they have in common. One can always hope.

Two years ago, tens of thousands of refugees crossed the Austrian border into Germany. DW's Nina Haase and Sumi Somaskanda traveled to the border region and asked if the newcomers feel welcome today. (23.06.2017)

The German minister has claimed migration is at the heart of society's disillusionment with politics. Chancellor Angela Merkel, however, said she would have put it a bit differently and called migration a "challenge." (06.09.2018)

A survey in Germany reveals a significant east-west split in public faith in the government’s handling of migration. The figures also show a lower level of trust in public institutions among easterners than westerners. (06.09.2018)