The Socialists may have won the general election, but the real story is the rise of the far-right nationalist Vox party as it enters the Spanish parliament, says Bernd Riegert. 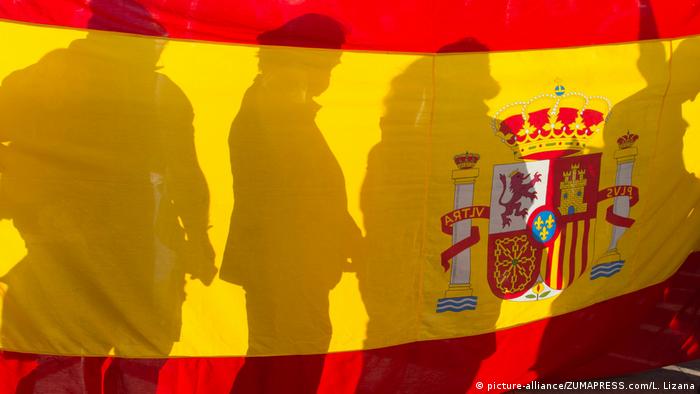 The response of Spanish voters to the separatist ambitions of the rich Catalan region is a new and strengthened nationalism. Anyone who wants to illegally and stubbornly split off from Spain, as the Catalan government has sought to do, will be harshly reprimanded. That was the answer that all major parties offered, even the Socialists.

Under pressure from this new nationalism, Socialist Prime Minister Pedro Sanchez has vehemently spoken out against Catalan independence. Even he cannot let himself be considered a "traitor."

Concepts like "unity of nation," fatherland" and national greatness" determined how many people would vote in Sunday's snap elections.

Right-wing populists Vox profited the most from this emotional debate. With their dissenting stance against separatism, women's rights, migration, social tolerance and openness, they responded to the deep-seated needs of many Spaniard men and even some women.

Voters longed for the return of the good old, supposedly stable and safe times. Supporters of Vox truly feel that the dictator Francisco Franco and the unscrupulous conquerors of Latin America were the ones who made Spain "great."

Vox only won 10% of the vote in this election, but as has happened in other European countries such as Poland, Hungary, Italy and Austria, the right-wing swamp has the potential to grow and eventually become the nation's main political movement.

This trend is nothing new, and Sunday's election served as proof that it has now caught on in Spain.

Spain will remain deeply divided after this election, and political stability is not in sight. The conservative Popular Party, who bled supporters to Vox, have also drifted to the right and have seen their party's vote share shrink dramatically.

The liberal parties remain undecided — the left-wing block can't reach a majority without the support of separatist regional parties.

Rocked by economic crisis and the political impasse with Catalonia, Spain needs clear leadership to propel urgent reforms. The pension fund must be saved from bankruptcy, the education system and infrastructure need investment, the emigration of young talent must be stopped and the country's debt must be further restrained.

These needs will not be met so long as political parties in Madrid remain concerned only about themselves.

Although the Spanish economy is still showing strong growth, the unemployment rate is still too high. In the long run, Spain will not be able to pull through if it continues like this.

The vast majority of Spaniards still support the European Union and appreciate the value of being a member of the bloc. But this could change if the economic situation worsens and leads to another banking crisis.

If and when Vox comes to need a new enemy other than the "traitors of the fatherland," they can very easily turn to "bureaucrats in Brussels."

After all, right-wing nationalists in Germany, France, Austria and Italy have used this exact same nonsense for their campaigns for the upcoming European Parliament elections in May.