The European Parliament has embarrassed itself by letting Mark Zuckerberg off the hook so easily. The Facebook CEO apologized again, but only clear regulations can contain the internet giant, says DW’s Barbara Wesel. 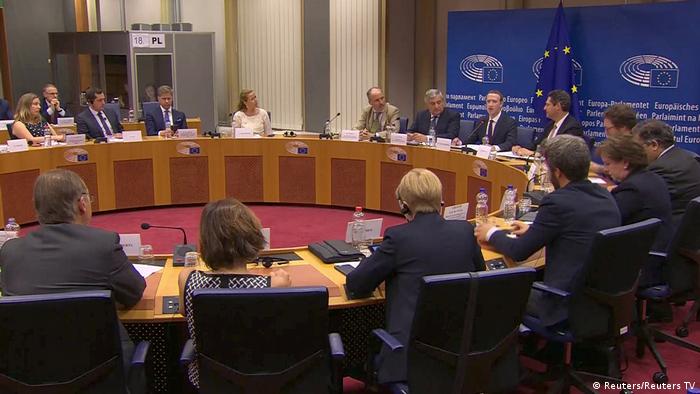 This was the kind of event that makes you want to scream and throw your TV out the window. During Mark Zuckerberg's appearance before the European Parliament on Tuesday, legislators showed themselves to be lamentably weak. Instead of posing clear, tough questions about misuse of data, election meddling, fake news, cyberbullying and tax evasion at internet giant Facebook, what we got was a show of vanity. The parliament's political leaders appeared eager to stroke their own egos, eating up large amounts of the allotted 90 minutes with their own comments and long-winded questions. That's not the way European Union leaders should show they're serious about grilling high-profile international players. This hearing was a missed opportunity and a cause for embarrassment.

Facebook founder Zuckerberg's apologies have long seemed to simply trip off the tongue. Meanwhile, Facebook has advanced to having an almost global monopoly on private data exchange over the past decade. Yet every time things get serious and breaches become public, Zuckerberg slips into a suit and tie and says sorry, we didn't mean it, we'll do better in future. He's perfected the look of innocence, referring frequently to Facebook's beginnings inside his Harvard dorm room.

But this is a man who has since become a billionaire many times over, and who knows exactly what he's doing. His business model is based on the sale of private data. And although he reassures us time and time again that the company will stop the data breaches, Facebook's profits are based on selling increasingly targeted, ever more invasive forms of advertising. And that is based on exploiting the data of ignorant or unconcerned users. In the United States, there are now reports about the application of facial recognition, without the explicit agreement of users. The possibilities are endless.

But when the European Parliament gives Zuckerberg the opportunity to cherry-pick which softball questions to answer, it is letting him off easy. Addressing the misuse of data by Cambridge Analytica, the Facebook CEO explained that his company had blocked 200 apps. Of course, he added, he can't really guarantee that it will never happen again.

But when the questions get more concrete, for example, about the cross-links between Whatsapp and Facebook users, then Zuckerberg starts talking about something else. His company's efforts to investigate social well-being, for example. Yet a slew of employees from the Facebook's early days have now left the company, or written books about how to better protect people from the destructive addiction to social media.

Ever since we found out that China's government is working on a totalitarian surveillance system that gives it emotional and social control over its citizens, even the most idealistic among us have had to concede that social networks are capable of creating individual monitoring on a scale beyond even the worst nightmares of George Orwell.

When Zuckerberg said in 2010 that the age of privacy is over, he wanted to change the habits of millions of people. He succeeded somewhat in doing that. But he was dealt a setback when, just a few years later, world events reminded us all that privacy is one of the most precious and important human rights. And we cannot leave the preservation of that right to business tycoons like Zuckerberg.

This is where the power of the market must end, and political regulation should begin. Zuckerberg says that overregulation limits new ideas. But we all know where that thinking leads. We gave Zuckerberg a long leash to pursue his business interests with limited oversight. His argument is no longer convincing. On the contrary, it raises suspicion.

The EU's General Data Protection Regulation, which takes effect this week, is an important first step. But we need further laws to set limits for internet companies. When Zuckerberg says that his company pays the taxes required of it, he is unfortunately correct. European countries have helped him pull off the most outrageous tax avoidance. That has to stop, and further EU regulation will only help.

But there is more to it than that. Regulating social networks is extremely complicated. But we know the political and social power they can wield, and especially the damage they can do to democracy. The era of the Wild West for Facebook and the like is over, even if Zuckerberg says sorry now and again. Now it is time to rediscover and protect our right to privacy.

EU mulls response to Russia's arrest of Navalny 23m ago

Opinion: Egypt is synonymous with hopelessness 2h ago