Facebook's CEO Mark Zuckerberg can hit the "like" button when it comes to his company's earnings: revenue is up significantly, as are average user numbers — good news for Facebook after the Cambridge Analytica scandal. 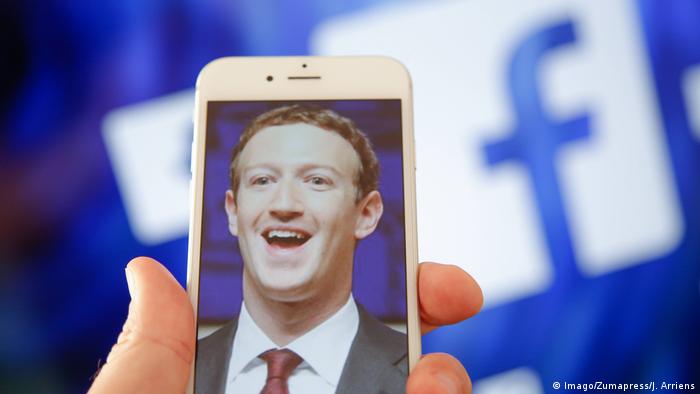 Facebook announced Wednesday that first-quarter revenue had risen, surpassing analyst expectations as the company bounced back after a month-long decline in the wake of a data privacy scandal.

The growth is a rare ray of sunshine for the tech giant, which recently had been on the public defensive not just over privacy issues but also over fake news and election meddling.

Bringing in the big bucks

The social networking platform took in $11.9 billion over the first three months of 2018, an increase of 49 percent from last year. The increased revenue made up for higher operating costs, giving the company a first-quarter net income of just under $5 billion — a 63 percent rise from 2017.

Facebook generates the majority of its revenue from advertisers. While the company lost around $50 billion in market value in the days after it was revealed that the Cambridge Analytica consultancy firm had harvested data from up to 87 million Facebook users, Wednesday's increased figures showed that fears of short-term fallout had not panned out.

In the hours following the release of the first-quarter numbers, company shares climbed more than 5.5 percent to $168.50. 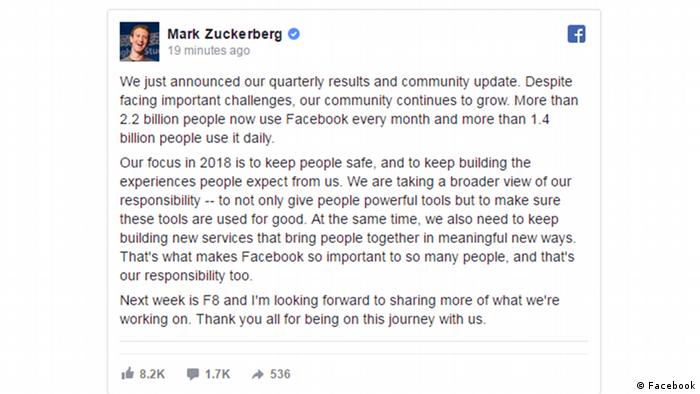 Facebook CEO and founder Mark Zuckerberg alluded to the data scandal in the first-quarter press release. "Despite facing important challenges, our community and business are off to a strong start in 2018," he said. "We are taking a broader view of our responsibility — to not only give people powerful tools but to make sure these tools are used for good. At the same time, we also need to keep building new services that bring people together in meaningful new ways."

Still attractive to advertisers and users

The bump in figures also testified to the resiliency of the company's targeted ad-based business model. Market researcher eMarketer predicted Facebook would take 18 percent of global digital ad revenue in 2018, second only to Google.

"Facebook is so large that it would take a lot of user defections to make a difference," eMarketer principal analyst Debra Aho Williamson said in a recent report.

"Most [advertisers] are disturbed at an individual level with what happened," market researcher Brian Wieser told AP, "but there's nothing that made Facebook overly toxic — yet."

Facebook's first quarter release also reported an increase in the number of people using Facebook worldwide, showing that data privacy concerns were not keeping users away from the social platform.

A recent drop in its North American users was reversed, the company added, stating that American and Canadian users had grown by 1 million individuals to 185 million over the last quarter alone.

The company's staff also grew, nearly doubling from last year to a total of around 28,000 employees.

The Cambridge Analytica scandal unleashed calls from politicians on both sides of the Atlantic for stricter rules regarding use of user data and tighter advertisement regulation. In legislature hearings, Zuckerberg promised to be more proactive about privacy. It recently rolled out a new privacy policy to comply with EU rules.