Who will pay for the reconstruction of Ukraine? Russia cannot be let off scot-free and leave the cost of rebuilding to other countries, just as it has in Syria, says Miodrag Soric. 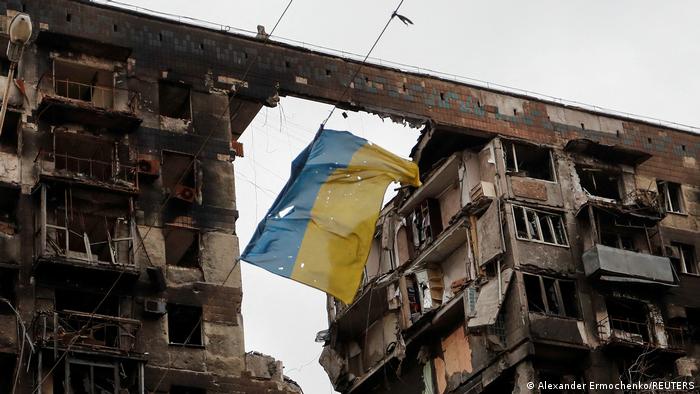 Russia should pay for the immense damage and the reconstruction costs in Ukraine, says Miodrag Soric

Finland did not make a "mistake" by applying for NATO membership, as Russian President Vladimir Putin has claimed.

Rather, it was his mistake to attack Ukraine. That is the only reason why Sweden and Finland are now bidding to join the Western defense alliance. Without Russia's war, the Scandinavians would never have considered seeking protection in NATO.

Putin cannot admit his political failure, to the detriment of his own country. As always, he blames others — this time, it's the Finns. To speak the truth would be an admission of guilt. The former KGB officer finds the truth disturbing, anyway. In Russia, it is denied, suppressed, twisted.

Russians are not allowed to call Putin's war by its name. Moscow's state-controlled media continue to speak of a "special operation," "preemptive strikes," of the alleged "liberation" of Russians in the neighboring country. They gloss over the fact that the Russian army itself is called occupiers by the Russian speakers in Ukraine.

According to Putin's thinking, even Ukrainian President Volodymyr Zelenskyy, who is of Jewish faith, is a "Nazi." The Kremlin leader claims that everything is going according to plan, even though his army is conceding defeat after defeat.

Putin resembles the Big Brother in George Orwell's novel "1984." There, too, the masses are led to believe that "ignorance is strength" and that history is being falsified. Russia's television is the spitting image of the novel's Ministry of Truth:it spreads hatred, lies and conspiracy theories. Just like in Orwell's novel, the security forces make enemies of the people disappear. All the lies, the hatred of invented enemies, of Ukraine, of the NATO bloc, of liberals, of whomever, are used to unite Russians, to prepare them for difficult times and to mobilize them. Fear is being spread. Orwell's model for his novel was the Soviet Union, and the lie was the foundation of the USSR. The Communist Party of the Soviet Union push for world peace while waging war in Afghanistan; the media praised Soviet patriotism. However, everyday life was dominated by cynicism and economic scarcity.

In the end, the empire of workers and peasants imploded. This time, Russia's collapse will be worse than in 1991. Putin is isolating his country from the rest of the world, while China, the future world power, is waiting in the wings.

The sanctions imposed by the West are not an end in and of themselves. Their goal is to stop Russia's war. But economic sanctions only take effect over time. Right now, Russia is like a goldfish in an aquarium into which someone has drilled a hole and from which the water is slowly escaping. Many Russians still believe their daily lives will hardly be affected by the war, but that will change.

Moreover, the war weakens the country. Wars cost many billions. The long-term consequences for the national economy will be devastating — not to mention the morale of the people.

Putin's actions have left an indelible stamp on many Ukrainians, who will consider Russians as mortal enemies for generations to come. They will remember that many Russians between Kaliningrad in the west and Vladivostok in the east have shown indifference or even supported this senseless murder and destruction.

Nobody knows how long the war will last. What is clear is that with every passing day, the Ukrainian army is getting stronger. The effect and effectiveness of the modern weapons and systems supplied by the West will grow as more become available and, in turn, Ukrainians become more and more confident.

Some Ukrainian government officials are predicting victory by the end of this year and are making plans for the country's reconstruction, the cost of which will run into the hundreds of billions. The bill should be picked up by those who caused the damage: Russian taxpayers.

Russian foreign exchange reserves in the hundreds of billions are sitting in foreign accounts — state assets that have been frozen in the wake of the sanctions. Normally, international law protects this money, because it originally belongs to Russia. But Putin can no longer invoke international law. The entire world has witnessed the Russian army's war crimes, day after day.

That's why money from these assets should be transferred to Ukraine in monthly installments, so that Kyiv can cover the running costs of the state: Pensions for pensioners, salaries for public servants, repair and reconstruction of the infrastructure destroyed by the Russians.

Transferring the money gradually would also have the advantage of preventing corruption. In any case, Russia should write off the money. For Ukraine, it would go toward preparing for a new beginning.

This piece was originally published in German.

War in Ukraine: Is Germany losing its EU leadership role?