Opinion: Putin is here to stay, as are tensions with the West

Russia will attract a lot of attention in 2018, due to the presidential election and the Soccer World Cup. But it's already clear that one event will be much more unpredictable than the other, writes DW's Miodrag Soric. 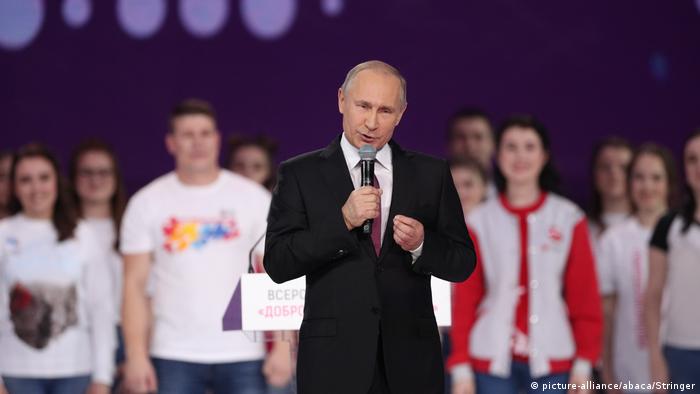 Next year's presidential elections in Russia will be anything but exciting. Everyone, including the competitors, is aware that Vladimir Putin will be the winner. After all, the Kremlin has the television channels under its control, it has the largest amount of financial resources at its disposal, and it can make recourse to the government apparatus, which includes the security forces.

If there were a candidate who could seriously jeopardize Putin's victory, they would hardly receive permission to stand.

Therefore, the Kremlin could be satisfied with what is due to happen during the coming weeks and months: an election campaign unworthy of the name. A competition in the course of which the president can continue to display statesmanship without exhausting himself actually dealing with his rivals.

But the government strives for more than just coming out victorious. It wants a landslide victory, one that is based on a high voter turnout, something in the range of 70 percent. The more, the better.

This goal, however, will be difficult to reach, as voters will be asking themselves why they should drag themselves along to the ballot boxes if Vladimir Putin will retain presidential power anyway? If they don't have an actual choice, ordinary Russian citizens prefer to stay at home.

In principle, this sort of play-acting would not be necessary for Vladimir Putin. After all, independent opinion polls confirm that he is the clear favorite. Even in a real and fair competition the 65-year old would come out victorious. Why he isn't prepared to take the risk will remain his secret. Perhaps Putin is afraid of demonstrations, maybe he is under the impression that many of his compatriots have forgotten the immensely popular annexation of Crimea, or that they may hold him responsible for their declining standards of living.

No, the balance of power in Russia will not be much different in 2018. It might, however, be more intriguing to see what will happen after the election on March 18: will the Russian president, by means of conscious personnel decisions, prepare his country for the post-Putin era?

Kremlin pundits are offering their conjectures as to who will be appointed Prime Minister. The position of the current PM, Dmitry Medvedev, appears to have been weakened. Allegations of his having diverted millions of rubles into his own pockets persist. Will Putin appoint a liberal economics expert as his deputy, or will he prefer a member of the Russian security apparatus? Whichever way the chips may fall, the decision could be setting the course for Russia's future policies.

A new power factor in the Middle East

That includes the country's foreign and security policy. Since the US is withdrawing its peacekeeping forces from many regions, both Russia and China are making efforts to fill the resulting power vacuum. In the Middle East, where Russia had hardly been a force to reckon with until a couple of years back, President Putin has become a key player by now. His protege in Syria, President Assad, remains in power – Russian interests in the region have prevailed.

By contrast, there will quite probably be little movement in the Ukraine crisis next year. Moscow will continue to say no to a return of Crimea to Ukraine and to phasing out military support for the Russian-speaking population in the country's east. Therefore, western sanctions will remain in force. Both sides are playing the waiting game. Even large-scale US arms proliferation would hardly change the balance of power in Ukraine. Russia is hopeful that Washington's and Brussels' interest in the region will gradually fade away.

A good host – but a safe venue as well?

Due to the soccer World Cup tournament in summer, Putin will receive worldwide attention. Even if the Russian squad makes an early exit from the tournament – Russia will do everything in its power to be a good host.

The competition is of course under threat of terror attacks committed by Islamists, for example Russian-speaking IS returnees from Syria or Iraq. Suicide attacks in public places are always difficult to prevent. All the same, American and Russian agencies collaborate when it comes to combating terrorism. Which is a start.

The opposition leader has urged Russians to boycott the vote, saying "Putin is terribly scared." The European Union have expressed serious doubts about Russia's electoral system. (26.12.2017)

Despite broad support for Navalny's presidential bid it is widely expected that officials will keep him off the ballot. Should Putin win a new six-year term he would become Russia's longest serving leader since Stalin. (24.12.2017)

UK: Droughts across England as River Thames source drier than ever before 20m ago

Opinion: World Cup 2022 — No anticipation, only chaos in Qatar 36m ago