It is the first time the pope has ever visited the Arabian Peninsula, the birthplace of Islam. Francis' trip to the United Arab Emirates has given new hope to interfaith dialogue, says DW's Christoph Strack. 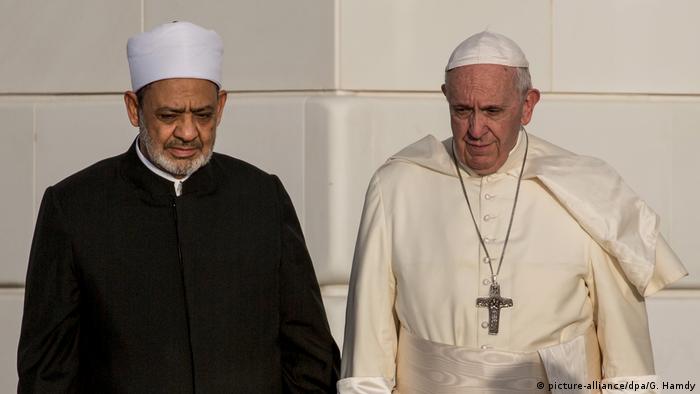 A trip like this is almost provocative in an era of flourishing populism, building walls, hatred of the oppressed and religious persecution. Pope Francis' historic decision to travel to the Arabian Peninsula is the antithesis of all that.

A papal journey always comes with fanfare. Francis' trip to the United Arab Emirates was no different. There were plenty of colorful moments, but perhaps the most inspirational of them all was the image of the grand imam, the sheikh and the pope hand-in-hand.

Read more: Human Rights Watch: 'The UAE is not a tolerant state'

Francis and the grand imam of Al-Azhar, Ahmed el-Tayeb, signed a joint declaration — a strict rejection of violence and terrorism, an appeal for development and justice, and an affirmation of women's and children's rights. Some aspects of the declaration can be interpreted as an admonition to the UAE — a country with a poor human rights record.

A call for peace

The "Document on Human Fraternity for World Peace and Living Together" is a message to the global community. That is why this trip, the pope's 27th thus far, is his perhaps Francis' most important. Previous travels have taken him to the Holy Land, Turkey, the Central African Republic and Azerbaijan, to Egypt, Myanmar and Bangladesh. It was Francis' fifth meeting with Grand Imam el-Tayeb. It would be interesting to know whether el-Tayeb, who is an influential authority in Egypt, will read the document out loud back in his home country, which has also has a poor record on human rights.

Francis' trip to the UAE evoked recollections of a similar journey exactly 800 years ago, when Francis of Assisi, determined to forge peace, traveled to the Nile during the Fifth Crusade and preached to the Muslim army's Sultan Al Kamil. Today, politicians might call him crazy. The current pope, a Jesuit from Argentina, is the first head of the Catholic Church to choose the name of that religious order's founder — Francis.

During the interreligious conference and even the large mass in Abu Dhabi, the pope spoke of Saint Francis and his instructions on how his brethren were to approach Saracens and non-Christians: "At that time, as many people were setting out, heavily armed, Saint Francis pointed out that Christians set out armed only with their humble faith and concrete love."

Francis didn't mince words in Abu Dhabi. "Human fraternity requires of us, as representatives of the world's religions, the duty to reject every nuance of approval from the word 'war.' Let us return it to its miserable crudeness. Its fateful consequences are before our eyes," he said, naming Yemen, Syria, Iraq and Libya. "Together, let us commit ourselves against the logic of armed power."

The UAE is currently part of the Saudi-led military coalition waging war in Yemen.

From a political point of view, Francis was undiplomatically direct. But in the framework of his trip, his remarks were consistent. UAE officials had stressed ahead of the visit that Francis could say whatever he pleased. The pope took advantage of that license, but he didn't exploit it.

Not everything will change for the better after this trip, the speeches and the declaration. There will continue to be extremists, terrorists and Christians who are persecuted for their faith, be it in Pakistan or the Arabian Peninsula. But neither side can go back on the words of the Abu Dhabi declaration.