More than 130,000 people have died of COVID-19 in the US — and the number of cases is exploding. Yet President Donald Trump refuses to take action. DW's Ines Pohl fears that the United States is heading for disaster. 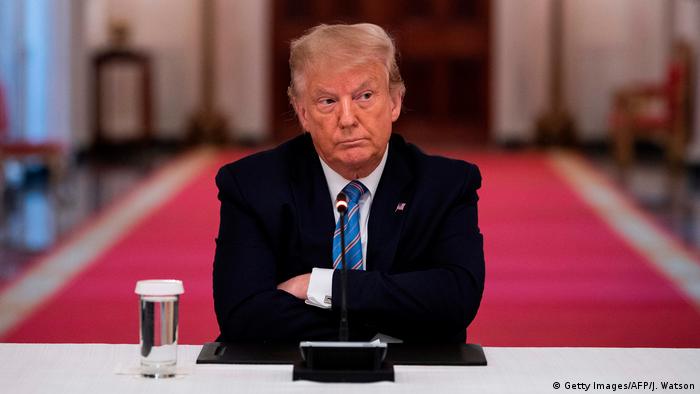 US President Donald Trump's world is small. And simple. He only acknowledges the facts that suit him. He gets rid of people whose opinions do not match his. He refuses to consider points contrary to his politics. Trump's agenda is simple: give more to the people who already have plenty — and keep Christians on his side so that they vote for him again.

This approach has worked for Trump. The economy was doing well. Unemployment had fallen. The 45th president of the United States had a dedicated fan base who believed he was showing the world that America is "great" — especially when it puts itself first. But a virus has brought everything crashing down.

Though many countries put stringent measures in place to prevent the spread of the novel coronavirus, Trump refused to take the pandemic seriously. It was as if he thought that he was still hosting a reality show and writing the script himself.

From the beginning, the economy was Trump's No. 1 priority — not public health. Trump and some of his advisers were apparently prepared to sacrifice elderly and ill populations so as not to disrupt the economy and endanger his chances of being reelected in November. It was business as usual: No one should stop working, no business should close, and no profits should be lost.

But then New York turned into a hellhole. At that point, Trump needed to begin taking the situation seriously. He should have finally announced that he was putting public health first. He should have issued directives to ensure that people wore protective masks and kept a distance from each other. He should have done this to prevent the rapidly spiraling situation from getting even worse.

The virus continued to spread across the US. It is now ravaging states that typically vote Republican.

And the economy has not been spared. The worst-hit states are those that imposed few regulations early in the pandemic: the ones where authorities did not want to risk losing political support and spoke of intrusions on individual liberties rather than broad measures to preserve public health. They were covering for their president — a man who continues to blame the whole pandemic on his enemies.

Coronavirus in the USA: Trump's downfall?

The tide could be changing.

The coronavirus is particularly spreading in the regions that Trump needs for his reelection. Hospitals are filled to capacity, and the number of infections is expected to rise in the wake of last weekend's July 4th celebrations.

Finally, mayors and governors in many Republican states — even Texas — have made face masks mandatory in situations where socially distancing is not possible. Fewer people are attending Trump's rallies, and his efforts to distract voters from the catastrophic consequences of his failure to react to the pandemic seem to be failing.

Even some prominent Republicans have expressed their doubts about him or warned of the dangers that the United States would face should he win reelection. Many of his former supporters also seem to be waking up. They are worried as it becomes increasingly clear that they are at risk of getting seriously ill, of dying, of losing loved ones.

The number of Germany's dollar millionaires rose by 100,000 in 2019, according to the World Wealth Report. The US had the biggest upturn, although the coronavirus crisis could change the upward trend. (09.07.2020)