The low voter turnout for Macedonia's referendum is a bad starting point for the country's future development. The West's hesitation has also contributed to this outcome, writes Adelheid Feilcke. 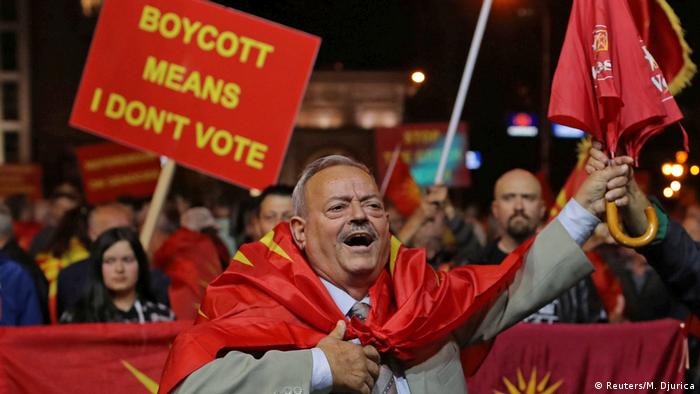 Nothing has been lost yet, but the referendum's result demonstrates a sentiment among the population that gives food for thought. Even if 90 percent of those who went to the polls voted yes — as some now sugarcoat it — the vast majority remained silent or even actively boycotted the vote.

Wake-up call to all participants

In doing so, the broad support that was hoped for is lacking for a process that had clearly linked three future issues: the naming agreement with Greece, and the integration of the Balkan state into the EU and NATO. As such, the failed referendum is also a wake-up call not only for developments in the country itself, but also for the future geopolitical orientation of the Balkan state.

Despite massive support from high-ranking politicians such as Chancellor Angela Merkel, EU Council President Sebastian Kurz and NATO Secretary General Jens Stoltenberg, Macedonian Prime Minister Zoran Zaev and his government have failed in recent weeks to mobilize the population sufficiently and convince them of the deal's benefits. The opponents' resistance has been too emotional and too rigorous. Some want to punish the government, while some just don't want to accept the change of name to the Republic of North Macedonia.

The massive boycott of the referendum shows Macedonian society's deep political division and a great deal of uncertainty on questions of national and European identity. The calculated move to try to reduce national feelings in favor of a European perspective has not worked out. On the contrary, the highly emotional debate about the name issue has been stylized into a question of the Macedonian nation and identity.

Now the lost decades, in which far too little has been done within the country and internationally to settle the dispute over the name Macedonia and the legacy of the ancient empire between Greece and Macedonia, are taking revenge. The EU and NATO have done too little for far too long. In Skopje, the defiance, fear and wounds run deep. Earlier euphoria for the EU and NATO is now fraught with doubts. Even if feared Russian influence was not proven in the referendum, anti-Western narratives are spreading. The battle for people's minds and hearts is in full swing.

The opposition has taken the country hostage

The opposition, known as the Internal Macedonian Revolutionary Organization — Democratic Party for Macedonian National Unity (or VMRO-DPMN for short) is triumphant after the failed referendum. It has declared the Zaev administration to have failed as well as the Prespa agreement with Greece. Despite all assurances that Macedonia is striving to become integrated into the EU and NATO, the opposition has proven to be unyielding on the name issue and strengthened since Sunday's boycott success. It is taking the entire country hostage with its domestic power struggles.

For the next, decisive round, Macedonia's head of government is now putting all his eggs in one basket. The name agreement with Greece must be passed by Macedonian parliament with a two-thirds majority in order to become valid, and on Sunday evening, Zaev called on opposition members of parliament to support him. Failing this, he has threatened to call new elections in December. The country's future is highly uncertain.

This is all the more reason that the Macedonian parliament must somehow succeed in this almost impossible task. Otherwise the deal with Greece will fall through, and NATO membership and EU accession will move into the distant future. The consequences for Macedonia would be disastrous.

Matters of national identity and interest are at stake as Macedonians vote in a highly divisive referendum on what to call their country. Membership in NATO and the European Union could hinge on the result. (28.09.2018)

As Orthodox Christian nations on the frontiers of Europe, Russia and Greece have long enjoyed close ties. The recent name dispute with Macedonia, however, has led to a falling out between the two countries. (03.08.2018)

Poland doubles troop contingent on border with Belarus 2h ago

Opinion: NATO-Russia rift is next level in Putin's escalation 6h ago

Opinion: German coalition talks have a long way to go 8h ago